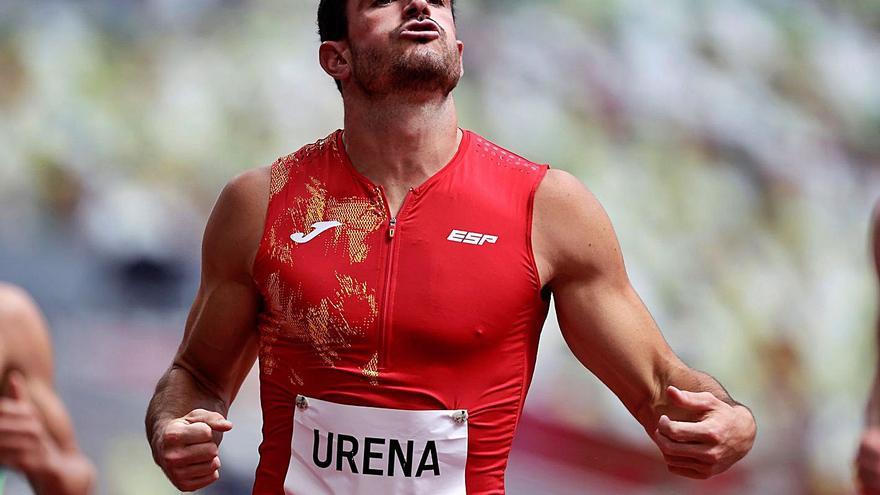 The Spanish representative ended the first day in eighth position, after adding 4,310 points, in an Olympic diploma position and with very close fourth place (59 points). The first three (Warner, Moloney and Lepage) seem unattainable, except for the disaster of one of them. The rest of the squares are very open.

Ureña began his test with a good mark on the hectometer, winning his series and placing sixth overall after stopping the clock at 10.66, his personal best. In the long jump he did 7.30 meters, while in the weight he threw 13.97 meters, tests after which he dropped to 12th place.

However, the colivenco broke two other personal records in the afternoon session in Tokyo, one of the season (2.05 meters in height) and another of his life (48.00 in 400 meters) to add 4,310 points and place in eighth position, with the podium to just over 200 points, but close to the fourth.

Thursday has another five events ahead of him: 110 hurdles, discus throw, pole vault, javelin throw and 1,500 meters. After doing ten tests at maximum performance in just 48 hours, Ureña hopes to at least “catch” a diploma.

In the women’s combined, the young Maria Vicente he recovered from a poor shot put score to finish in 12th position on the first day of competition, with four events contested. The Spanish was the fastest among all the participants in the 200 meters, which closed the day and event in which the British was injured Johnson-Thompson, one of the favorites. Like men, women also complete the heptathlon today.

Of the rest of the Spanish performance yesterday, the access to their respective finals of Asier Martinez, in 110 meters hurdles, and Marta Pérez, in 1,500 meters.

Martínez, who has remained as the only national representative in a test in which the injured Orlando Ortega at the last minute was running as a clear option for a medal, finished third in his semifinal and entered the last round with the best time of the two repechage. This same morning (4:55 hours) he will complete his already remarkable performance in these Games, without giving up anything.

For his part, Pérez got into the 1,500-meter final by finishing fifth in his series, via direct square, without having to wait for play-offs. The Spanish beat her personal best ever (4: 01.69).

Javier Cienfuegos he finished tenth in the hammer throw final, without being able to enter the improvement that was awarded by an Olympic diploma place. Carolina Robles was 14th in the 3,000 meter hurdles, while Lorena Bokesa and Odei Jainaga they fell eliminated in 400 meters and javelin throw, respectively.

The american Sydney McLaughlin he did not want to be less than the norwegian Karsten Warholm And just like his counterpart in the men’s event, he took gold in the women’s 400-meter hurdles with a world record. McLaughlin, who had the best world record for just over a month, dropped from 51.90 in the American qualifiers to 51.46. His compatriot Muhammad was silver and the Dutch Bol, bronze.

Another record in 400 McLaughlin hurdles also pulverizes the clock | EFE

Adrian Ben He closed his participation in Tokyo 2020 with a great fifth place, in an 800-meter final in which he had already made history, being the first Spaniard to contest it.

Ben did not lose face to the race at any time and in the final sprint he won several places to take an Olympic diploma. The Kenyans Korir and Rotich were gold and silver. The Polish Dobek completed the podium.