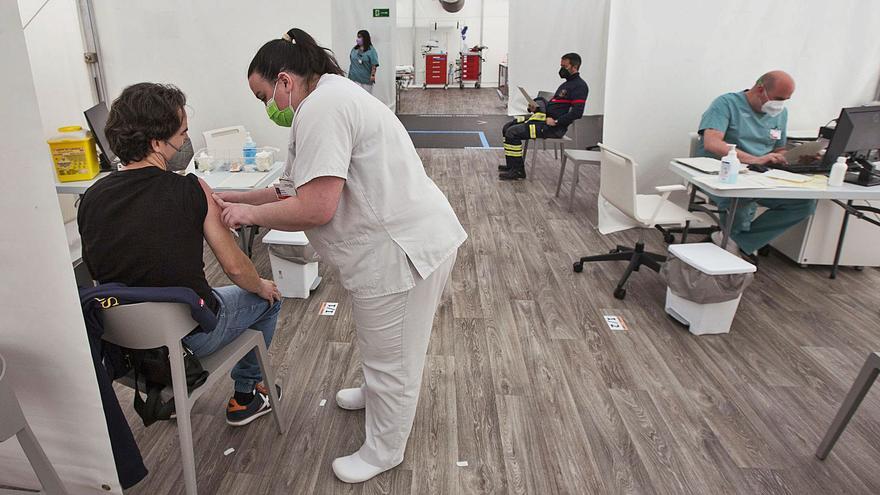 In this way, it is expected that this noon the presidents of the Spanish employer CEOE, Antonio Garamendi, and the regional CEV, Salvador Navarro, sign with the head of the Consell, Ximo Puig, the collaboration agreement that will make this initiative possible. A proposal that the businessmen are presenting in all the communities – under the umbrella of the Plan Sumamos launched by the employers – convinced that vaccination is the key so that the economy can begin to recover. The event, which will be held at the Palau de la Generalitat, is also expected to be attended by the president of the CEOE Foundation, Fatima Banez, and the Minister of Universal Health, Ana Barceló.

Although the agreement itself does not specify the specific measures to be developed, the document provides the framework to channel a collaboration that, in the case of the Community, the CEV wants to focus on vaccination -in other autonomies rapid tests are carried out, for example- , and also creates a monitoring commission with two representatives for each of the parties involved to determine the actions to be carried out.

From the outset, the first will be to make it easier for large companies from about 500 workers and who have medical services can vaccinate their employees. This same Monday, a first telematic meeting was already held between the Ministry and the representatives of around 60 companies in the Community interested in this possibility, among which were supermarket chains such as Mercadona or Consum, El Corte Inglés, the financial entities that have their headquarters in the autonomy –CaixaBank, Bankia and Sabadell-, or the Alicante Baleària, Masymas, Vectalia, Carmencita, Grupo Soledad or TM Grupo Inmobiliario, in addition to hotel chains such as Poseidón, Magic Costa Blanca or Port Hotels, from the president of Hosbec, Toni Mayor, as pointed out by the CEV.

After this first contact, the firms that finally want to participate must send to the regional employer information on the number of workers they have in the autonomy and their age ranges, so that the CEV can provide them to Health. Thus, companies would vaccinate their employees according to the protocol by age that the Administration is marking at all times.

The CEV trusts that, in addition to the participants in the first meeting, new companies will join the proposal in the coming days – in total, in the Valencian Community there are 111 that exceed 500 employees, according to the employer-, with which it calculates that in this first round it could be vaccinated between 100,000 and 150,000 workers of the entire autonomy, according to Salvador Navarro.

However, the objective is to expand the base of participating companies, extending it to smaller firms each time. A second phase for which it would be necessary to involve accident insurance companies, something that is still being analyzed, as Navarro himself acknowledged yesterday. These organizations are already collaborating with the Administration to vaccinate certain priority groups, such as dentists.

The CEV estimates that as of April, when pharmaceutical companies normalize their production, The Community will begin to receive more vaccines than the current capacity to administer them, That amounts to 894,000 monthly doses, without taking into account the macro-centers that the Generalitat has already announced to raise this number. Employers estimate that by making the most of private hospitals, companies that have their own toilets and the companies’ external risk prevention services, the rate could be doubled.

Salvador Navarro charges against Madrid: “It goes against everyone”

The president of the CEV believes that a “worrying nationalism” is emerging in the state capital.

The president of the Business Confederation of the Valencian Community (CEV), Salvador Navarro, regretted yesterday that the Community of Madrid go “against” in the measures taken against the pandemic of covid-19 and now do not want to close the perimeter at Easter. “It gives me the feeling that lately a worrying nationalism is emerging in Madrid, which worries me as much as the independence movement of Catalonia,” said the employer leader. Navarro showed his “surprise” at the attitude of the president of the Madrid Government, Isabel Díaz Ayuso, who “goes against everyone, even his own party”, since in other communities governed by the PP such as Galicia, Andalusia or Castilla and León “yes they are doing their de-escalation within normality and have made their process of closing sectors.” However, in the case of Ayuso, the leader of the Valencian regional employers’ association believes that “Madrid is being used as the government’s battering ram.” In his opinion, “there are internal problems and what he does is pass the buck to the discussion with the Government permanently.” “Lately in Madrid I think they even have a different metric system, they don’t use the decimal of course,” he ironized.