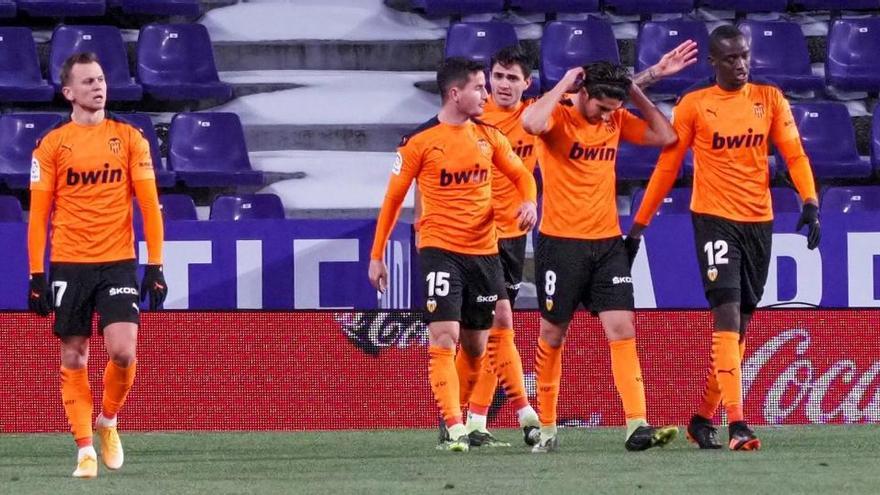 He Valencia was rediscovered with the victory in Zorrilla, after eight days without achieving it, by beating a Real Valladolid that he did not find enough finishing ability and that, despite being serious in defense, he did not have the luck on his part (0-1).

Javi Gracia’s team came out with great intensity and he impressed speed on the wings to try to surprise the Blanquivioleta team, which resulted in dangerous arrivals of the Ché players, with the Uruguayan Maxi Gómez especially active, favored by the imbalances in the center of the local defense.

The sides of Valencia made Valladolid suffer, and they were not comfortable on the offensive level either, although Toni Villa managed to reach the visiting area to send his shots to the outside of the goal, thanks to a good job from Roque Mesa.

Masip had to give himself thoroughly to prevent the rival’s first goal, first, after Gayá’s shot and then to deflect Soler’s powerful shot. It was the most incisive warning from Valencia, which was eagerly seeking the local goal. On the contrary, the Valladolid people hardly disturbed the Valencia defense.

And despite that greater offensive push from the Valencians, the break was reached with the initial 0-0. An equality that Real Valladolid came out determined to break after the restart, seeking to regain courage in attack, with Weissman as the main protagonist in that restart of the clash

But it did not take long for the visiting team to show the offensive bite again, so the game was still open, and Sergio González opted to make the first changes, in order to increase production in attack, giving entry to Hervías and Óscar Plano, while that Javi Gracia bet on Manu Vallejo.

In the end, both It was the jug to the source, which Soler inaugurated the scoreboard in the José Zorrilla, thanks to a powerful and dry shot that Masip had no option to stop. The response of the coach of the Blanquivioleta team was to exhaust the changes, to fight, at least, for one point.

At that moment, Manu Vallejo scored a goal, taking advantage of a dead ball, which ended up being annulled after the intervention of the VAR, offside, which gave Real Valladolid hope to throw the rest in the six minutes of extension.

And that option occurred, but Guardiola’s header, in the 96th minute, after a free kick from the Chilean Fabián Orellana, hit the post, so the Valencians were able to secure a victory that had been them denied for two months.

Incidents: Match corresponding to the eighteenth round of LaLiga Santander, played at the José Zorrilla stadium. Before the start, the Real Valladolid players showed a shirt with the motto Eusebio Force, to support the former player, Eusebio Sacristán, who remains in serious condition after having undergone surgery for a brain hemorrhage on December 31.