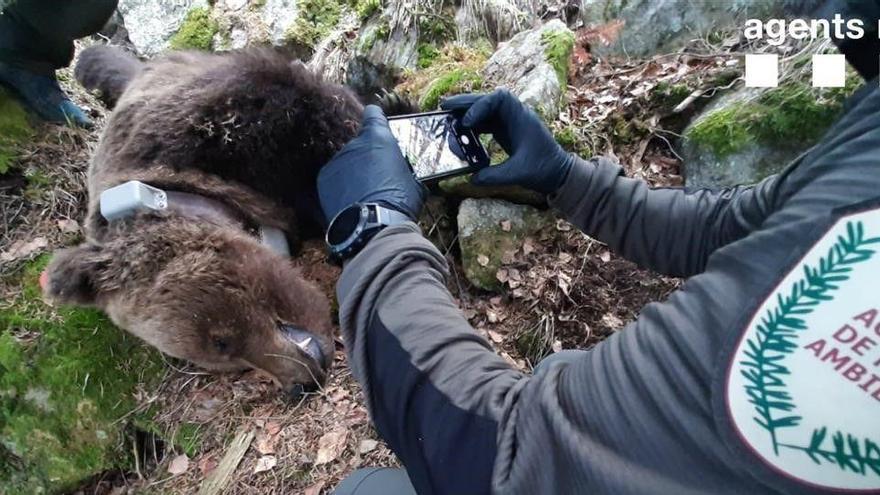 Cachou was born in 2015 and was the son of the female Plume and the male Balou, both of Slovenian origin. From that country come the animals with which the recovery of the Pyrenean bear was activated in the nineties, on the verge of extinction. Cachou was called to play a fundamental role, explains Iván Afonso, technician of the reintroduction program. It had Balou blood and that guaranteed to ventilate the genes of the Piros lineage, a bear that mated so much that it has ended up developing a serious inbreeding problem in the population – of about sixty specimens – because almost all of them descend from the same male. Cachou had other genes but developed a high predatory behavior. In just two weeks, in early fall 2019, he killed five mares. Five attacks that put him in the crosshairs of extensive ranchers who raise horses and sheep in the wild, those most affected by his attacks and among which are several of the most enthusiastic members of the WhatsApp group of the ‘antioso platform ‘. The technicians, with Afonso at the helm, intervened to try to reorient Cachou, diverting his appetite towards the wild deer. It worked. Cachou began hunting deer, and until he lay down to hibernate in late 2019, there were no more horse bites. It was late, his sentence was written

Cachou’s body was found in a ravine in one of the mountains that surround Les, a municipality located 20 kilometers north of the capital Vielha. On March 26, when it is estimated that he was poisoned, Spain was confined, crossing the hardest phase of the state of alarm, when you could only go out to go to the supermarket. That was the first clue. “With the borders closed and without hikers, it was necessary to look for their authors nearby”, police sources explain.

“The first ones who saw that it could be a criminal death were the Conselh Generau technicians themselves, who requested that the necropsy look for traces of poison.” That this was publicly hidden is due, according to these Mossos sources, to the will of the judge to keep the investigations secret. “It is unfair that conspiracy theories that include local government are now being fed,” the Mossos conclude.

The Conselh was not involved but two men connected to the organ were. The Rural Agents immediately collected the testimony of several people who explained that José Antonio Boya, ‘minister’ of Territori between 2015 and 2019 -and owner of an inexplicable duplicity: on the one hand, the head of the program for the reintroduction of the brown bear in the Pyrenees as ‘conseller’ and by the other president of the association of horse breeders and administrator of the group ‘antioso platform’-, had stated on several occasions the suitability of eliminating Cachou by supplying him with antifreeze. This thread led to the second suspect, as contradictory as the previous one – anti-scientific activist at the same time as environmental agent and former employee of the same program for its preservation – who had access to privileged information: he knew that Cachou had woken up from his hibernation , that he ate deer – he was presumably intoxicated with deer meat – and where he moved thanks to the GPS.

Upon receiving the positive for antifreeze obtained in the necropsy, the worst fears were confirmed and the rural agents requested help from the Criminal Investigation Area of ​​the Mossos in the Pyrenees. For five months, the follow-ups and wiretapping What the police have done have found anomalous behavior on the part of both suspects, such as asking for WhatsApp to be deleted or suggesting that some things should only be discussed in person. They have also allowed to include in the case three other people about whom there are still no well-founded suspicions. In early December, the environment agent was arrested and Boya summoned to testify. Both are neighbors of Les, good friends who had shared political training -Convergència Democràtica- and regulars at demonstrations against the bear.

The repopulation of the brown bear in the Pyrenees receives more than two million funds from the European Union that administered the Piros Life project, of which they were part the University of Lleida, the Conselh Generau d’Aran, the Generalitat de Catalunya and the Oso Pardo Foundation. Guillermo Palomero, president of the latter entity, continues to rub his eyes at the police accusation of two people who charged for protecting Cachou and who, allegedly, have maneuvered to finish him off. “If it is proven that they are responsible, we will prosecute them. And we will also ask that Cachou be replaced. Because they killed him and it was essential for the subsistence of a protected species that has been agreed to live in the Pyrenees,” he reasons.

In recent months, in addition to Cachou, two other brown bears have been shot dead by hunters in Aragon and France. And there is a suspicion that behind the disappearance of other specimens near Les – after two years without being sighted or without finding traces of hair or feces, the technicians consider them dead – the hand of man could also be hidden. Cachou’s corpse was located thanks to the GPS collar -the rest do not wear it- and the autopsy confirmed the criminal origin of his death. His case has made it possible to prove the existence of an alleged plot to eliminate him that could have been conspired before to destroy others. A practice that the Vielha judge’s investigation hopes to eradicate. The opposition that the antioso platform embodies, which also thrives on the local rejection of the institutions that live far from the mountains making decisions that condition the lives of those who inhabit them, will be more difficult to overcome.