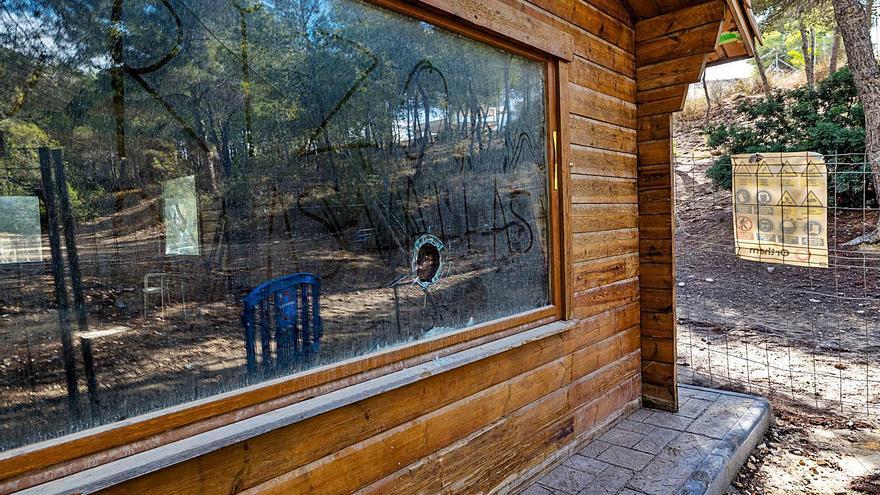 This future space is located in an area very close to the Municipal Pool in the Guillermo Amor Sports City, in Foietes. From there some trails start to practice sports and the area was cleaned up to be able to locate this wooden hut. Thus, the windows of it are broken and some parts are shattered. “They have even tried to open it,” the councilor for Public Space, José Ramón González de Zárate, told this newspaper.

A situation that has not liked many residents of the city who showed their concern on social networks. Because in recent times, vandalism has occurred in other areas of the city, such as on the ascent to the Cross, in Serra Gelada.

But not only the breakage of elements worries. Garbage or other belongings can be seen in other areas of this natural area where many residents of the city walk or practice sports. The area of ​​El Moralet is a natural area located between the urban area of ​​Benidorm and La Cala. On the table there is a project for the improvement and public use of this place, a green area of ​​just over 102 hectares. The action is part of the Sustainable and Comprehensive Urban Development Strategy (EDUSI Benidorm) and nearly 900,000 euros have been earmarked for it. Specifically, it is intended to create a network of trails and cycle-paths, recovering the old route of the «trenet» as a greenway and generating spaces for leisure and recreation, while promoting biodiversity and rescuing valuable ethnological elements patrimonial. And that performance includes a hiking and bike Interpretation Center.

That is the construction that now appears in poor condition due to vandalism. “We will have to fix all the damage,” added the mayor. However, he explained that this booth was already located because “it was a donation from a promoter of one of the tallest buildings in Benidorm”, something that allowed “to save money because it was in very good condition.”

The damage to this construction or the natural area comes just before the improvement works of El Moralet begin. The Benidorm City Council has already awarded these works and the works will begin next week, according to the mayor of the area. However, it was in February of this year when the part where this construction is located that will house the interpretation and mountain bike center was refurbished.

The El Moralet project is not the only one included in the EDUSI of Benidorm. The City Council has four other actions underway: improving accessibility in Colonia Madrid; also in Els Tolls; the project for the rehabilitation of a bullring and construction of an annex building; and the execution of the youth hostel and interpretation center in the Parque de la Séquia Mare.