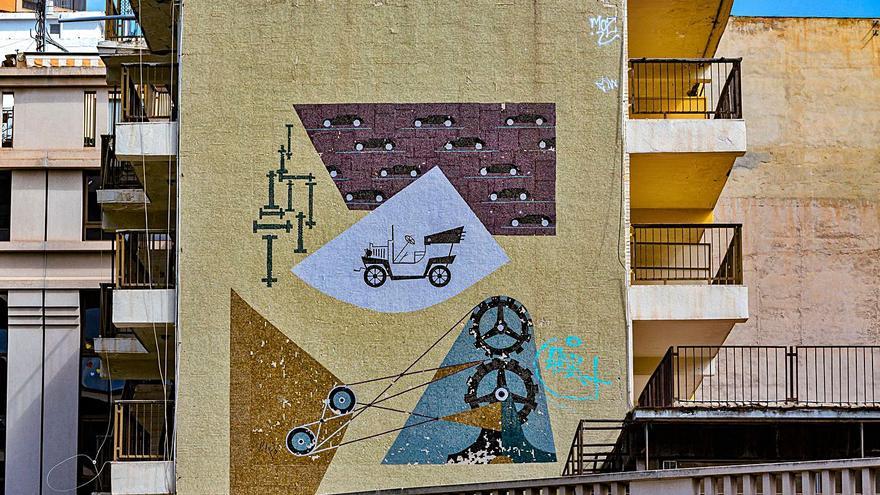 That brand, which is not a specific drawing and what else looks like the signature or symbol of some name, has appeared these days in the work, a 6.68 meter high and 5.36 meter wide mural elaborated in the mid-60s by the Alicante artist Manuel Baeza and that has an importance for both the city and cultural. So much so that the work has been “saved” from the demolition project proposed for the property to make way for another new building in the same place.

The light blue graffiti has been made in an area of ​​difficult access to the right of the drawing and touches part of those tiles. Thus, in the upper part of the same wall another painting of the same white color has appeared, although it only affects the facade, not the mosaic. An act of vandalism that the City Council has condemned: «We regret this type of action; fortunately they are punctual and do not usually occur in the city, “the Councilor for Heritage told this newspaper. Ana Pellicer.

How to clean it?

Although it is true that it is not known when this act could have been committed against the cultural element, the Consistory of Benidorm is already studying how to “save” the part that has been damaged. “We are looking with what products we can clean it that affects the colored tiles as little as possible,” said the mayor of the area. Some jobs that will also have to see the way it is cleaned because “it is in an area of ​​difficult access.”

And it is worth remembering that the building, which is located in the Emilio Ortuño avenue, in the heart of Benidorm, it has been abandoned for more than a decade. In fact, the area where the graffiti has been made does not have direct access. However, the councilor indicated that “we are going to clean up and try to identify the perpetrators” who could be punished for their act against the mosaic.

The Councilor for Urban Planning, Lourdes Caselles, also pointed out that the owners of the property have already assigned the work to the City Council. Thus, as this newspaper published, the building, built in 1964 and which housed the old Renault Workshops (hence the mosaic theme), was cleaned up by the owners at the beginning of the year while waiting to carry out the project that is there. about him. Specifically, they presented a PRI (Interior Reform Plan) with which the demolition of the current farm, with an area of ​​1,300 square meters, and the construction of a new one with greater buildability than that would correspond; in exchange, he had to make assignments to the municipal patrimony.

But in addition, a relocation and assembly project of the immense mural that got the approval of the Conselleria and the Heritage Department to save it from demolition. But there is still no new location for it, among other issues, due to the difficulty of its size. For now, they will try to save him from the act of vandalism.