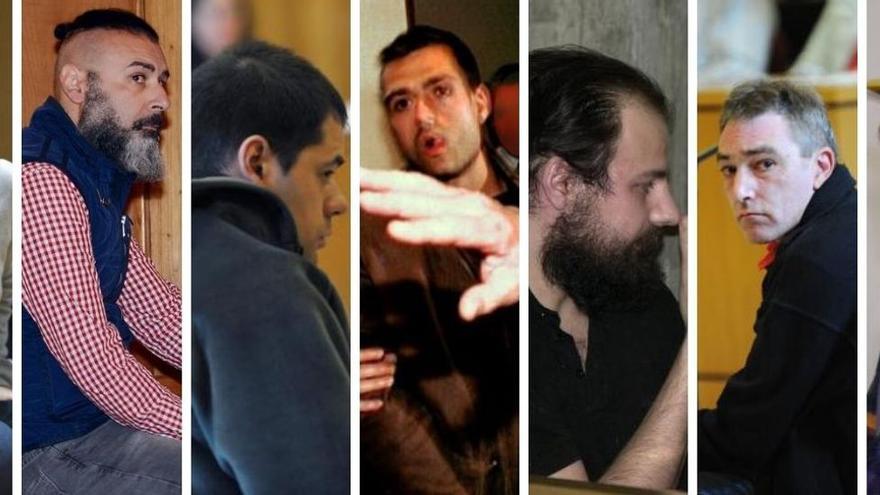 The worst omens they point out that little Anna She is also dead, and while waiting for the fatal outcome to be confirmed, the numbers of this type of violence in its maximum expression translate into 39 crimes against minors in Spain since 2013, date on which these murders began to be included in the official statistics of sexist crimes.

This page of the black chronicle of the Galician community starts in 1998. Since then, 10 children have been murdered in a context of sexist violence by 7 criminals, with the aim of “killing while alive” their mothers.

With Anna and Olivia, the figure would go to 41 boys and girls murdered within episodes of gender-based violence against the mother, by the father in most cases, according to official figures from the Ministry of Equality.

In Galicia, the little ones Amaia, Candela and Javier

Of those 39 crimes against minors, three were registered in Galicia: Amaia and Candela, 4 and 9 years old respectively, were brutally murdered in July 2015 by their father in the Pontevedra town of Moraña. Two years later, the father of Javier, 11 years old, he killed his son in Oza-Cesuras. But the darkest history of Galicia relates other cases outside of these statistics that are not so far apart in time. This page of the black chronicle of the Galician community starts in 1998. Since then, 10 children were murdered in a context of sexist violence by 7 criminals, with the objective of “kill while alive” to their mothers.

The crime on the street Chile: Boris was 11 months old

The Vigo Manuel Enrique Suarez Barbosa He was sentenced to a total of 32 years in prison: 17 for the murder of his girlfriend Laura Jurkiewicz, of German origin, and 15 for that of their son, Boris, who was about to turn one year old. When the police recovered the bodies, the 22-year-old was naked and had a neck wound and incisions all over the body with the appearance of having been caused with a machete. The police also inspected the rest of the street containers and in one he found the corpse of a baby in a T-shirt and a diaper. The murderer beat them with a machete while the victims were sleeping, then threw them in the trash.

Crime of Gondomar: Eva and Ana were 2 and 3 years old

One of the most tragic cases is that of Victor Bouzós, a native of Gondomar. He was 28 years old when, in November 2001, he kidnapped his two daughters, Ana and Eva, 3 and 2 years old respectively, from their mother’s home and fled with them in the car to Portugal. Although in this case the outcome was disastrous. The search for the man and the two girls began immediately, as he sent a letter to his wife – who had initiated the divorce proceedings – in which he announced his revenge. In the Portuguese town of Vila Nova de Cerveira he killed the girls, connecting the exhaust outlet of your car into the passenger compartment with the help of a flexible vacuum cleaner tube. His parents managed to talk to him and convinced him by phone to return to Vigo with the girls, although he noticed that they were already very ill.

Both were admitted to the hospital in the olive city, although Eva was already a corpse when she entered and Ana survived just three more days. Both girls died “gassed” in the words of the prosecutor, as the Nazis had done with Jews in concentration camps. Víctor Bouzós was sentenced to 40 years, of which he had to serve 30 according to the sentence handed down by the Sixth Section of the Court based in Vigo in April 2003.

Rape and crime of your partner’s child

THE VIGUEZ Francisco Javier Campos Triñán went to prison for the beating murder of little ivan, son of his sentimental partner, barely two and a half years old, whom he previously brutally sexually assaulted. The man had been left to care for the child at the home they shared on Torrecedeira street in Vigo, as his mother had attended a wedding. Little Ivan passed away on September 26, 1999 in the ICU of the Xeral Hospital as a result of the beatings received at the hands of his mother’s sentimental partner, who had brutally raped him.

Three years later the Sixth Section of the Hearing based in Vigo Francisco Javier Campos was sentenced to 19 years in prison, 15 for sexual assault and 4 for reckless homicide, considering that it had not been proven that he wanted to beat the child to death, although the ruling highlighted that “to satisfy your sexual desiresTaking advantage of the total helplessness of the child, he repeatedly introduced his penis or some object through the anus. “A year later the Supreme He admitted the appeal of the prosecution and raised the sentence to 25 years by considering Francisco Javier Campos guilty of murder. Campos Triñán entered prison with 32 years and obtained his first permit with almost 50, at the end of 2017.

One of the most heinous crimes was the one committed by the Coruña José Luis Deus on October 2, 2010, when he killed his son, just over a year old, after setting fire to his vehicle with the baby inside. That day, the perpetrator made several phone calls to his ex-partner and, in one of them, told him that no “he was going back to his son” and what was going on “to kill the boy, who had an open gas cylinder in the car, that he was going to fly if a couple from the Civil Guard approached “.

The condemned man had placed the bottle of butane next to the child’s seat, making sure that the child, who was in the back seat of the car, could not defend himself. So he set fire with a lighter to the gas tap and, as a result of this action, the fire spread throughout the interior of the vehicle reaching the little boy, whose corpse was charred. During the trial, which was resolved with a 23-year prison sentence for the accused, the lawyer alleged that the man had been “crossed the wire” and that he had “made good on his threat.” His ex-partner, who had separated for the second time from the father of his son after months of abuse, wanted revenge by giving him where it could hurt the most: his 14-month-old son Pablo.

The twins from Monte Alto were 10 years old

Javier Estrada, 30, killed to blows with the shelves of two shelves and the saddle of an exercise bike to the twins of 10 years, children of his girlfriend, in August 2011 in Monte Alto (A Coruña). During the trial, the defendant gave little details about the day he killed the children. In a statement he gave before the hearing, he stated that that day he got up angry because Mar had refused to have sex with him, but before the judge he limited himself to saying: “I don’t answer that,” he exclaimed, in addition to having denied remembering whether he had hit the little ones with the shelves and if he had finished them off by nailing a saddle to their heads. “Did you do it?” Asked the children’s father’s lawyer. “I don’t know,” he replied.

For the crimes of Adrián and Alejandro, its author is fulfilling 20 years of the 43 years and 7 months in prison to which he was sentenced for the Provincial Court. The high court agreed to apply the Article 76 of the Penal Code on the recasting of penalties. The magistrates partially upheld the appeal presented by Estrada’s lawyer, since they did not appreciate that the crime was committed maliciously, an indispensable circumstance for the conviction to be for murder. “It could be spoken of cruelty, but never a treachery, since the defense of the children was not impeded, nor even the possibility of flight”, the Supreme Court justices stressed.

Crime of Moraña: Amaia and Candela

Amaia and Candela, aged four and nine, suffered on July 31, 2015, in the Pontevedra town of Moraña, one of the most brutal murders in memory. Her father, David Oubel, put his two daughters to sleep with a cocktail of drugs and then cut their throats with a radial, finally finishing them off with a knife. Oubel, who confessed the facts, was the first sentenced to reviewable permanent prison in Spain.

“I acknowledge the facts. I acknowledge the facts of the prosecution”. This was what David Oubel Renedo declared during the trial for the crimes of his daughters. After two years of instruction in which he remained silent, the Moraña parricide acknowledged his authorship before a popular jury. And according to those facts reported by the Prosecutor’s Office, Oubel supplied a cocktail of drugs diluted in cocoa to put his two daughters to sleep before killing by cutting both their necks with a radial, to finish them off later using a knife.

A cocktail of drugs that caused the effect that he expected in the youngest, but that failed to numb the older one, that still slightly maintained consciousness and that pudo make a gesture to try to oppose his father’s attack, but without having effective defense capacity, according to the prosecutor, given that she was handcuffed as well as sedated.

Marcos Mirás, 42 years old and a resident of A Coruña, was sentenced by the Provincial Court to reviewable permanent prison, two years after committing the murder of his 11-year-old son, a sentence upheld by the Supreme court. The events occurred on May 5, 2017. That day Mirás struck on his son’s head with a construction shovel in a difficult-to-access mountain in Oza-Cesuras until the end of his life. During that day, he had picked up the boy at the family meeting point where his ex-wife had left him, to spend the weekend with him. During the trial, it was considered that Mirás killed his 11-year-old son – during Mother’s Day 2017 – with the “intention of causing the greatest psychological suffering to his ex-wife.” In her statement, the mother confessed that “I know he is going to kill me, but I never thought that he could be in danger”, in reference to the little one.

After committing the crime, its author tried to hide the corpse of the child, dragging him to a place even further away from the wooded area where he killed him, where he began to dig a hole to deposit it there, although he finally gave up and left it in the open. Then he went to sleep in a hotel, where I had previously reserved a room. The next day, he led the police officers to a forest track very close to the place where he had left his son’s body.

Galicia will legislate against this violence

Vicarious violence It still does not appear in the Penal Code, but in the field of autonomies, the Parliament of Galicia admitted for processing a BNG bill last April that will make the Galician legislation the first to legislate this type of violence, so that the mothers of these minors are given the necessary coverage and support.

Precisely, in November 2020, the mother of the girls murdered by her ex-husband in Moraña spoke in this regard on her social networks. Rocío Viéitez gave voice to the situation experienced by the parents of children murdered by their partners or ex-partners, and that the law does not recognize as victims of gender violence. “The parents of murdered boys and girls we don’t even have a name that defines us, we are orphans of sons and daughters ”, the mother of Candela and Amaia denounced.