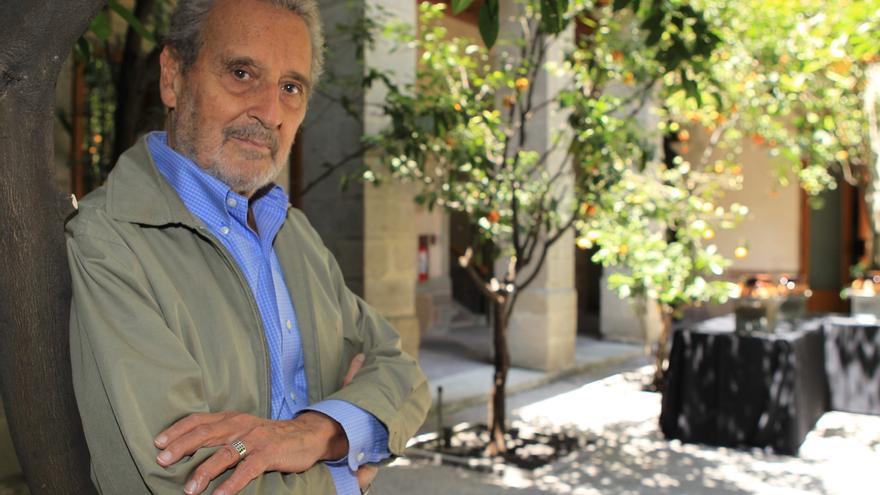 The Mexican painter and sculptor of Spanish origin Vicente Rojo passed away this Wednesday at the age of 89 in Mexico City, reported the National College, an academic institution “in which he was active at all times.” “With great sadness I report the death of Vicente Rojo, a great artist and a great human being. A dear companion at the National School. A strong and supportive hug to Barbara (his wife), his family and friends. Rest in peace,” he also confirmed on Twitter the lawyer José Ramón Cossío, Rojo’s partner at the National College. “In addition to being one of the most outstanding visual artists of his generation, Vicente Rojo collaborated in the founding of editorials, cultural supplements and other publications that defined the cultural life of Mexico in the second half of the 20th century”, highlighted the National College in a statement.

Vicente Rojo was born on March 15, 1932 in Barcelona, ​​city from which he was exiled to Mexico in 1949. In his host country, the artist studied painting and typography and enjoyed a enormous prestige and recognition being considered one of the most important authors of abstractionism in Mexico. Rojo made for more than fifty years an extensive work such as graphic designer, painter and sculptor. In addition, he collaborated in the founding of editorials, cultural supplements and other publications that defined the cultural life of Mexico in the second half of the 20th century.

Throughout his career, Vicente Rojo presented numerous individual exhibitions and participated in countless group shows around the world. His work has been shown in exhibitions at various prestigious venues in Mexico, the United States, Spain and Germany.

Vicente Rojo became a creditor in 1991 for National Prize for the Arts granted by the National Council for Culture and the Arts (Conaculta), and has received the Medal of Merit in Fine Arts granted by the Spanish Government. In 1993 he was appointed creator emeritus by the National System of Art Creators. He was also a doctor “honoris causa” by the National Autonomous University of Mexico (UNAM) and also well known as the designer of the first cover of “One Hundred Years of Solitude”, the famous novel by Colombian Gabriel García Márquez.

Vicente Rojo Almazán was a fundamental painter and sculptor for the evolution of culture in the second half of the 20th century, who left a deep mark on Mexico, his adopted country. Exiled since 1949, Rojo (Barcelona, ​​1932) was one of many Spaniards who enjoyed enormous prestige and recognition in this country, surely higher than that of Spain and his native Catalonia.

Rojo studied painting and typography shortly after arriving in Mexico and embarked on numerous cultural activities, among which the most important was founding, together with José Azorín and the Neus brothers, Jordi and Quico Espresate, the Era publishing house, of which he was artistic director.

The stamp marked an era, since in it he published his first collection of poems, “Los elements del fuego” (1962), at the age of 23, the Mexican Jose Emilio Pacheco, Cervantes Prize for Literature in 2009, and the Nobel Prize for Literature Gabriel Garcia Marquez (1980) the first edition of “The colonel has no one to write to him” (1961).

Before, in the fifties, he worked in the publishing area of ​​the National Institute of Fine Arts (INBA), in the supplement “México en la Cultura” of the newspaper Novedades and in the Magazine of the University of Mexico.

He was the nephew of Republican General Vicente Rojo Lluch (1894-1966), a prominent Spanish Republican leader who opposed the rise of dictator Francisco Franco. Rojo Almazán was married to the writer Bárbara Jacobs.

Rojo’s work has been developed from five artistic series: “Signs”, where he works with basic geometric shapes, “Negations”, in which each painting denied the previous one, “Memories”, an attempt to escape from a difficult childhood , “Mexico under the rain, conceived one day when it rained, and” Escenarios “, several miniseries together that review previous themes.

Author of an extensive pictorial, graphic design and sculpture work developed in the second half of the 20th century, since 1980 he began to alternate painting and sculpture. “In this exhibition I wanted to confront or combine something that I had not done before, which is the delicacy of the paper with the strong presence of bronze. That is a bit the meaning of this exhibition,” he said about his experimentation.

Critics consider Rojo an abstractionist author and place him in the Mexican art movement of “La ruptura”, which has sought new formal and conceptual languages, although he considered himself more than anything an innovator in form and color. Artists such as José Luis Cuevas, Manuel Felguérez, Roger von Gunten, Enrique Echeverría, Lilia Carrillo, Brian Nissen and Fernando García Ponce are in the movement.

Over the years his work has been exhibited in various venues in Mexico as well as at the University of Texas in Austin, at the Círculo de Bellas Artes, the National Library and the Casa de la Moneda Museum in Madrid (Spain). among other enclosures.

In life collaborated with numerous magazines such as “Artes de México”, which he founded, “Nuevo Cine”, “Diálogo”, “¡Siempre!”, and “La Gaceta” of the Fondo de Cultura Económica (FCE), and made several covers of “Vuelta” (1978-1982), founded by the poet Octavio Paz in 1976.