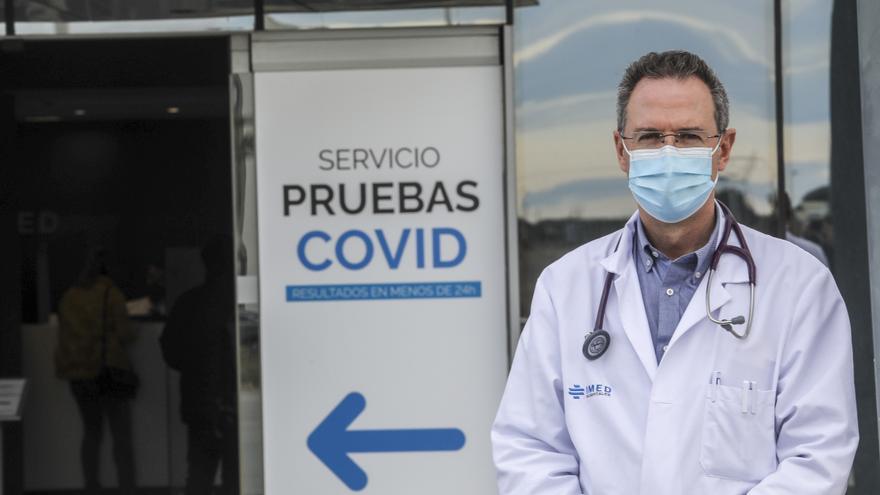 Doctor Víctor Martínez, despite the current situation, tries to see the situation positively. Although that does not stop being critical. More than anything because he doesn’t understand that after learning a lot about what happened in China, what happened to us in the first wave, after the scientists told us how we had to prepare, the tracker training plans, the way to avoid contagion, big government plans, examples from third countries … that is, in the face of so many opportunities, he is surprised and indignant: Why are we worse than ever here and now? Let each one draw their conclusions », he reflects.

Do you think there was no political courage, knowing full well what is happening now, decree a lockdown at the beginning of December?

A lockdown is a political measure. Many points of view must be taken into account and other parameters other than those strictly sanitary must be assessed. Personally, based on what we are seeing and suffering, of course I do believe that it should have been done.

Yes, as a professional who has to deal with horrible stories every day and who is seeing things that he had never seen in his professional life, unfortunately for a long time, I am disheartened by the fact that the delays in making decisions are only going to get worse things. When a measure is taken it takes several weeks to see the effect.

When will we return to have “acceptable” data on patients in the ICU and ward in general in the province?

I don’t have an answer for that. We are seeing completely inexplicable virus behaviors and very large territorial and cross-country differences, even with very similar restrictive measures. Making predictions is very risky.

Unfortunately there are many preconceptions regarding private medicine. Currently, in private hospitals in Alicante a very high number of coronavirus is being seen. This is a global problem that affects everyone equally.

Do you think that the private sector has been ignored in the past and even now by public administrations in this covid crisis? In other words, as if private health personnel were not health personnel or you were almost on the fringes of this.

Private hospitals, and I think I’m not just speaking for the group to which I belong, have taught a lesson in commitment during the first wave and throughout the rest of the pandemic. Think that they are centers with limited staff and resources that have been dealing with their own pathology and a large number of patients referred from Social Security, managing to avoid a catastrophic collapse of the health system. People who use private medicine are a very broad group in society, people who invest modest amounts in private insurance, civil servants, State Security bodies, health groups and retirees for whom we are their social security. We are one more part of health and I sincerely believe that we are doing a great favor to Public Health.

What is reaching your inquiries? What do you have to deal with these days?

We have seen a great increase in psychological pathology. People somatize their problems into multiple physical complaints. Digestive problems, headaches, etc. are very common. Unfortunately, there are quite a few people usually followed by Social Security who have not been treated as usual and have had to go privately to our centers. Patients with great concerns who have had to exert financial effort to be heard by a specialist.

What was going through your head when the private staff, until a few days ago, were excluded from the first vaccination groups?

We are facing a historical and absolutely exceptional moment. I think we need high-mindedness from our superiors and our politicians. We must all row in the same direction as it is to overcome this. When you see that a judge has to explain to those in charge that private health workers are just as much people as public health workers and force through a judicial order to exercise a right recognized by the Government itself, the truth is that frustration and sadness are the first feelings that come out of me.

What value do you place on vaccination?

When you see someone carefree without a mask or wearing it under the nose, or meet people who have met with various groups and without measures as if the problem was not with him … what would you say?

I would like you to come with me and see a sick elderly person in a hospital room, alone, scared to death, not knowing how to use a mobile phone to communicate with their loved ones, unable to leave the room and being treated by people who look like astronauts. I think just by seeing that look they would stop doing those things.

Have you been able to get something positive on a personal or professional level from all this?

Yes, I consider myself a positive person. I am left with the response of my colleagues, with the solidarity of good people (which is the majority), with good faces at work despite what we are going through. I have seen how uninfected people have decided to lock themselves in a room with the person they love to face a safe contagion and to take care of them and those are the things that help you to think that we must continue and that we are going to get out of this.