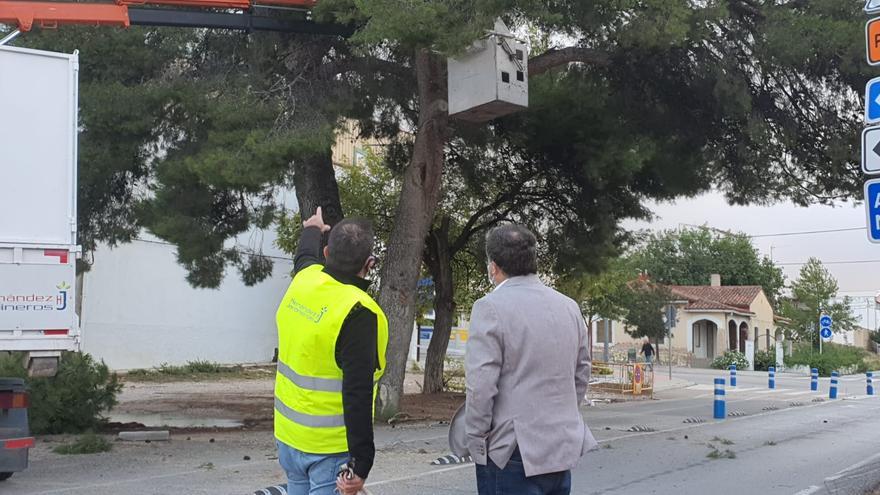 The Urgent Pruning Plan for urban trees in Villena, which began on September 10 at the request of the mayor of Villena, Fulgencio Cerdán, continues to advance rapidly and has already cleaned up the trees of Paseo Chapí, some specimen in poor condition of the district of Las Virtudes, the schools and the outer perimeter of the Marlene Park. The mayor himself has taken advantage of this week to visit some of the areas where work is being carried out with the aim of advancing in these emergency works, before the start of the ordinary pruning period, which usually begins in early October. Cerdán has indicated that “Our intention is to put in order the trees in our city that had caused a problem last August. Thanks to the contracting company, we are making rapid progress, we have healthier trees and safer public spaces “. The Urgent Pruning Plan is a commitment of the mayor and the mayor of Parks and Gardens, Paula García, before the breakage and detachment of several voluminous branches last August in different parts of the city. The UTE Gestamur, the concessionaire of the parks and gardens service, has been in charge of most of the work, while the actions in the schools were entrusted to another company.

The UTE in particular, which began its work at the beginning of the year, carried out a global study of the tree situation and it has carried out in these days a study in height on the state of the urban arboreal mass. Thanks to these preliminary works, the pruning of pines and cedars in the Paseo Chapí and the felling of a banana that was sick. In addition, they acted in an elm tree in Parque del Mercado and on the outer perimeter of Parque del Marlene. In the next few days the final works of the Market Park, it is planned to act preventively on a carob tree in the park of the Municipal Music Band, and in a willow tree in the Plaza del Rollo. Subsequently, the need for emergency pruning has been detected in elm specimens and in the felling of a carob tree from the Martinez Olivencia Square. Finally, work will be done on the elm trees of the Marlene and the pruning of a banana in María Auxiliadora. The mayor thanked “the extra effort that the staff is carrying out to fine-tune our green spaces and clarified that all the fellings are justified with a study and technical diagnosis that confirms the non-viability of these trees and the consequent danger in the event of their fracture. trunk or branches”. Precisely, last June several examples of poplars were eliminated in the vicinity of the facade of the Chapí Theater when it was detected that they were ill, without the possibility of recovery and representing an eventual danger to passersby.