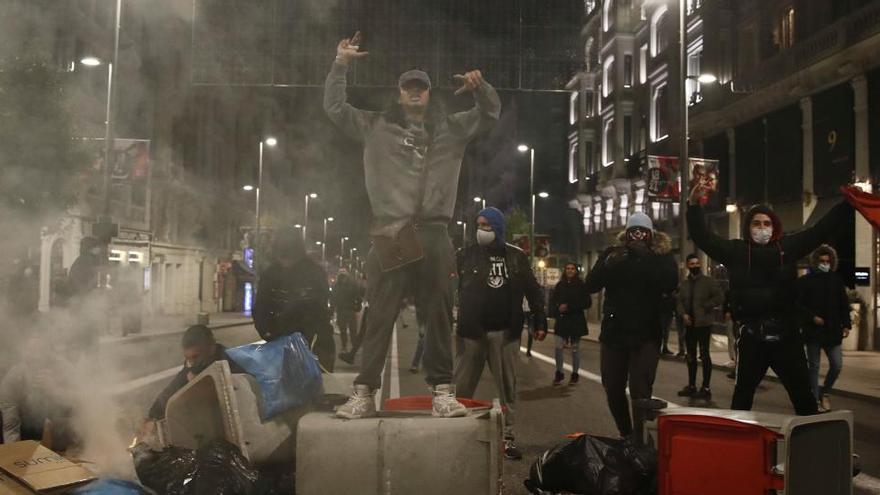 The National Police has 32 people arrested due to the violent disturbances that have occurred in the center of Madrid after a protest against coronavirus restrictions, where three officers have been injured by protesters. But, the incidents have not only occurred in the Spanish capital. Logroño, Bilbao, Malaga and Santander have also experienced violent episodes in their streets tonight.

In the center of the capital, a group of dozens of people tried to cut off Madrid’s Gran Vía late on Saturday night burning containers and forming barricades.

After ten o’clock at night the security agents evacuated the Puerta del Sol where a demonstration was called under the slogan ‘We go out to the streets, the people are tired’.

Faced with this situation, the attendees they moved their protest to the Opera Square where more than a hundred people with slogans against the Government of Pedro Sánchez gathered.

At the end of this demonstration several dozens of people went to Plaza España where they set up barricades and burned containers with the aim of cutting the Gran Vía.

During their march, they have also destroyed furniture in the main Madrid artery and have thrown stones at the windows of some shops.

The National Police have disbanded these individuals who have also thrown objects at the agents and have dispersed along Calle Princesa and the surrounding area.

At the moment there is 32 several of them arrested for the assault on a store in the Chueca area. In addition there are three officers injured by this group of people.

The Government Delegation in Madrid had evidence of this call on social networks but it had not been communicated to the department of José Manuel Franco, according to sources from this administration to Efe.

This police device aims to prevent the same altercations that have been reproduced in several Spanish cities from taking place.

In Santander the result of the violent protests was the arrest of four youths and a slightly wounded officer. Some 50 people went to the Plaza del Ayuntamiento to rally against the restrictions due to the coronavirus and, in the face of the heavy police presence, they dispersed through the nearby streets and burned containers and bins.

As reported by the Higher Headquarters of Cantabria, three of the young detainees, one of them a minor under 15, were arrested during the incidents, in which the agent was injured.

The fourth was arrested by the Local Police of Santander, after being recognized as one of the alleged perpetrators of the attacks on the police in the clashes that occurred the night before.

Seven policemen have been injured and another six people have been arrested so far in the riots that took place this afternoon in the center of Logroño, where about 150 radicals, many of them young, have crossed and burned containers and thrown stones at the Police.

According to data provided by the Government Delegation in La Rioja, there have been numerous identifications as a result of these incidents, which began at around 8:00 pm in the downtown area of ​​Paseo del Espolón, in Logroño; and there has also been riots in other Rioja municipalities, such as Haro.

In the capital of La Rioja, where the hotel business has been closed since Friday for a month, the radicals have crossed and burned containers and have cut traffic near the headquarters of the Riojan Executive and the Government Delegation in La Rioja, in full city ​​center.

Some of them have displayed posters with slogans such as “more experts and less political”; They have shouted against the restriction measures imposed to try to stop the spread of the coronavirus and have called for “freedom.”

They have also lit several bonfires, broken shop windows and looted some shops and caused damage to the photographic exhibition located in the central Paseo de El Espolón, which has caused several charges by the Police with riot control equipment.

The data provided by the Government Delegation indicate that, around 8:00 p.m., some 400 people, including some hoteliers, have gathered, peacefully and without permission to do so, at the headquarters of this body.

About ten minutes later, a large group of radicals, some 150, according to the Delegation, began to harass the National Police by throwing stones, flares and other objects, forcing the agents to carry out various interventions.

The President of the Government of La Rioja, Concha Andreu, in his Twitter account, he has appealed to “responsibility and respect” and has assured that “we will not allow a violent few to destroy the common good.”

What happened today in Logroño is the position furthest from the unity that is needed to fight the pandemic.

May the irrationality and hatred of a few not make us forget that the only objective is to protect the health of all and save lives.

“What is happening in the streets is intolerable”; “We are facing an extreme health crisis fighting the pandemic” and “we will not allow a violent few to destroy the common good,” he stressed.

Malaga has also been the scene of violent incidents this Saturday night. A series of riots led by a group of protesters has led to the deployment of the Police, incidents in which waste containers have been overturned, fires have been set and there have been races.

Members of the National Police Force and the Local Police have traveled to the neighborhood of Huelin, where the incidents and that a police helicopter has flown over as Efe has witnessed, and some arrest could have been made, although this has not been officially confirmed.

The protesters have moved to various places in the area, including Ayala Street; a device with presence of anti-riot agents and police vans They have traveled various points to control the situation, in which those who protested have come across citizens who returned to their homes to comply with the time limits of presence on public roads on the night when the Halloween party is usually celebrated.

Riots in the three Basque capitals

Four young people have been arrested in the center of Bilbao after the disturbances carried out by groups of young people opposed to the measures, while acts of vandalism have occurred in Vitoria in the city center and in San Sebastián, Arrasate and Eibar, In Guipúzcoa, damages have been registered due to the burning of garbage containers.

One of the young men arrested in Bilbao was throwing flares at the Ertzaintza agents, and the other three are accused of public disorder for dumping containers in the Alameda Urkijo, and will also face the accusation of an attack on authorities, according to sources from the Basque Police.

Groups Deniers had called a rally through social media at 9:30 p.m. in the Plaza de Indautxu in Bilbao, where numerous police forces had been deployed, but the small groups of people who gathered were identified by the Ertzaintza and initially disbanded.

However, groups of young people protesting the curfew and the rest of the measures approved to stop the pandemic have been deployed in the nearby streets in the Indautxu neighborhood, where they have crossed on the road and set fire to several containers of garbage.

Indautxu Square was already the scene last Thursday of a concentration of denialist groups, after which six people were arrested and about 25 containers were burned.

Also tonight, a group of between 60 and 80 hooded men have thrown stones and broken shop windows and doorways of houses in the center of Vitoria, according to the same sources.