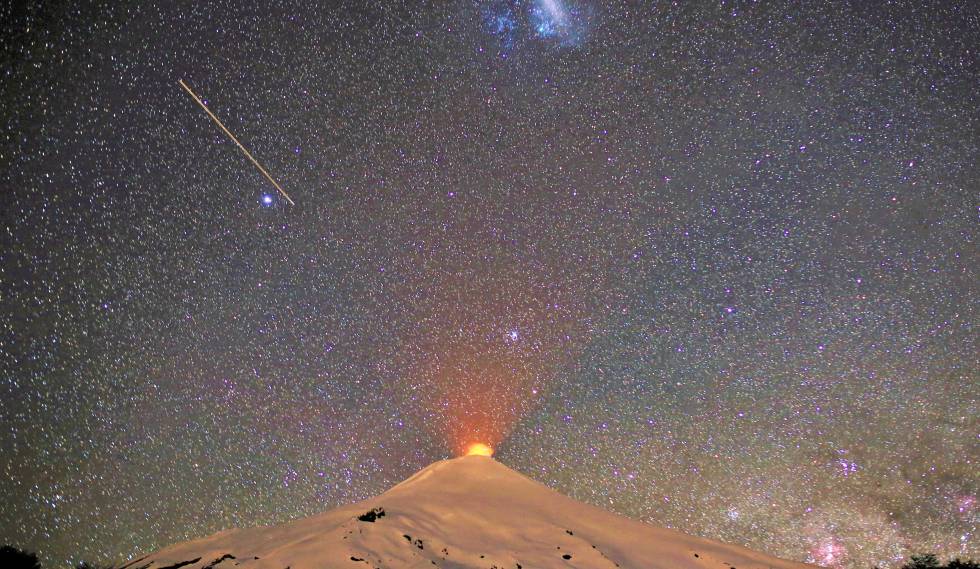 The guts of the Isla Bonita have been opened. A river of red lava runs through it. The island grows, the Earth grows, the Moon rotates. It will also increase the buildable land and the satiety of the eyes that look at the numbers of visitors that will gain, or not, per year while houses, memories and banana trees are lost.

La Palma is special. We astrophysicists know this so well that we have been coming for years taking care of your lights so that they allow us to see the skies. From there planets have been discovered, maps of entire galaxies have been built, the chemistry of the Universe has been unraveled, and the deepest and darkest, our past, has been looked at. Now La Palma roars and continues to make us fall in love because from its open entrails it reminds us of what we are: fragile and futile inhabitants of a living planet.

In our culture, the connection that is established between volcanoes and hell is quite obvious; it is enough to contemplate for a moment the images that come to us of the volcano without a name. In fact, in Greek and Roman mythology, Avernus, the crater of an extinct volcano located in southern Italy, represented the entrance to the underworld; and that continues to be, a place of eternal punishment or where the spirit of the dead dwells according to RAE.

Less obvious is the connection of volcanoes with the heavens, apart from the fact that their peaks are ideal places to place telescopes (see the observatories of the Boys roque, Teide and White Mountain). But, they were precisely volcanic eruptions, no less than on the Moon, one of the hypotheses that were shuffled in western scientific circles at the end of the 19th century to understand the phenomenon of meteor showers (including fireballs, meteoroids and meteors). ). Even the famous mathematician Simeon Denis Poisson stated that rocks from an eruption on the surface of our satellite could escape the gravitational pull of the Moon (2.4 km / s or 8640 km / h) and impact on our planet.

Also Read  Four people, including a baby, freeze to death on the US-Canada border

Today we know that there are rocks floating in space, which can impact our planet or catch fire in contact with the atmosphere. We have also learned that the Moon has no obvious volcanic activity, with a solid, monolithic crust that is not broken like Earth’s, and its interior no longer lets out lava. The reason is the size; Since our satellite is much smaller than Earth, it cooled much faster after its formation. In the past, the lunar surface was completely melted and the areas called maria (In the singular mare, from the sea because that is what they looked like from Earth three centuries ago), they are basins formed by enormous impacts that managed to split the lunar crust, causing the molten material from the interior to emerge to the surface and flood them with lava. They are the dull gray spots that are seen on its surface. They have, now we know it well, the color of solidified lava and fewer craters, which is why it is known that they are younger because they have had less time to suffer impacts from meteorites. Interestingly, and for a reason that we do not address today, there are fewer mares on the far side of the Moon.

And on a full moon, like today, all kinds of phenomena are attributed to our satellite: cultural, ancestral, mythological, psychological, reproductive. We have from werewolf transformations to childbirth, schizophrenia and fights; the fan is immense. But among those that we physicists measure are the tidal forces that slow down the rotation of our planet by lengthening the duration of the Earth day and that are more obvious in large liquid masses, but that are also appreciable in the crust that rises due to the effect. of lunar gravity about a foot. The Moon stretches and shrinks the Earth as it moves through its orbit, and the same, although we care less, does the Earth with the Moon. The largest deformations of the Moon occur when we are closer, in the perigee of the orbit, and can measure up to two feet.

In addition, about three thousand lunamotos a year are measured on the Moon, which are few and not very intense compared to those on Earth where hundreds of thousands are recorded a year. The origin is also different, since on our planet they are produced mainly by the movement of the plates into which the crust is divided, but since the Moon has a single layer covering the surface, the origin of these lunar tremors is different. For example, thermal tremors occur as the crust heats up and expands when the Sun rises after two weeks of a freezing lunar night. Meteorite impacts also cause tremors. But the deepest and most frequent occur about seven hundred kilometers below the surface, due to tidal forces. When a vibration occurs on the Moon, being cold, dry and almost rigid (it seems that I am talking about Castile) there is nothing to attenuate it. On our planet, the most intense earthquakes are brief (seconds, or at most one or two minutes), because the vibration dissipates quickly.

Volcanic activity has created the highest mountains on our planet and it seems to me most poetic that the place where the Earth shows us its entrails is also the place that helps us unravel the mysteries of the sky. La Palma is one of those points where the global fabric of biology and geology, culture, history and science is masterfully woven. What allows us to be alive, the geological cycle that closes and opens, is touched at its peak with what helps us to see beyond: the stars, other worlds, our cosmic origins.

Eva Villaver She is a researcher at the Astrobiology Center, dependent on the Higher Council for Scientific Research and the National Institute for Aerospace Technology (CAB / CSIC-INTA).

Cosmic Void is a section in which our knowledge about the universe is presented in a qualitative and quantitative way. It is intended to explain the importance of understanding the cosmos not only from a scientific point of view but also from a philosophical, social and economic point of view. The name “cosmic vacuum” refers to the fact that the universe is and is, for the most part, empty, with less than 1 atom per cubic meter, despite the fact that in our environment, paradoxically, there are quintillion atoms per meter cubic, which invites us to reflect on our existence and the presence of life in the universe. The section is made up of Pablo G. Pérez González, researcher at the Center for Astrobiology; Patricia Sánchez Blázquez, Professor at the Complutense University of Madrid (UCM); and Eva Villaver, researcher at the Center for Astrobiology