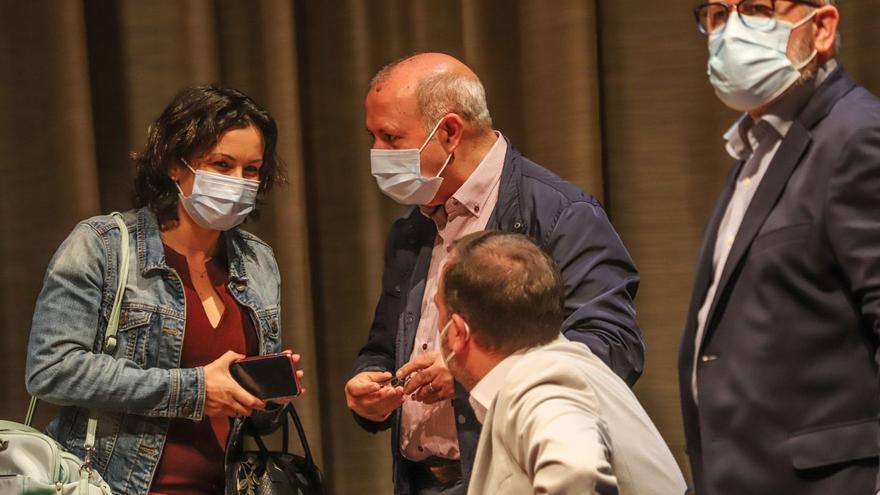 All groups showed “the seriousness of sexist violence as a political problem of the first order”, at the same time that, as the statement says, it is necessary to “continue advancing in the development of the State Pact”, except Vox, which raised its own motion. María Asunción Aniorte, who was in charge of defending her, spoke that violence within families can be exercised by both men and women and argued that there are many false complaints.

It was a proposal that generated such tension that the PSOE was absent from the plenary session at the time of the debate. Her spokesperson, Carolina Gracia, had previously requested that she not be admitted to the agenda, to “be able to stop these speeches, and more so on a day like today. There is no room for warmth. In this fight there is no politics. María Sandoval, co-spokesperson for Cambiemos, crossed out Vox’s speech as “misogenic”, since all she wants is that “women do not advance”, to which Javier Gracia, from the same party, added that “oozes xenophobia, when speaking East and West, as if we were still in the time of the Crusades. “What the body asks of us is to leave the room as the PSOE has done,” began Councilor Mar Ezcurra, from Ciudadanos, who emphasized “a resounding and pissed-off no to Vox’s motion, which explicitly denies that there is sexist violence ». On the contrary, he advocated recognizing “macho structural violence, because naming it and condemning it in public saves lives, while denying it makes us accomplices.”

There was also intense debate around the motion of the socialist party to urge the local government to create a Democratic Memory Service with a budget allocation, which was finally approved. Rafael Almagro, PP spokesman, insisted, once again, that for it to develop, the budgets must be approved. Vice Mayor José Aix, from the orange formation, was concerned about “the selective memory of some”, and invited “not to be permanently on the path of reopening wounds, but to value what unites us.” As an example, he cited the recent tributes to Amado Granell, for his fight against fascism. On this point, Vox made a request to Mayor Emilio Bascuñana to change the chosen square so that it bears the name of the one who freed Paris from the Nazi yoke, as it is located near the Church of Santas Justa and Rufina. “Out of respect for our patrons”, since according to Aniorte, Granell took part in the destruction of images in 1936, although those who have studied his figure point out precisely the opposite, that he was a man of peace and conciliator who saved the Oriolano heritage. “The session is adjourned,” replied Bascuñana.

Before, the new mobility ordinance was approved, which updates that of 2010, and a motion of the PP, with the support of Citizens and Vox, to raise the proposal to the Government of Pedro Sánchez so that it proceeds to “the immediate repeal” of the decree that modifies the Tajo-Segura transfer. “With this change he is mortally wounded by a visceral policy,” includes the text of the motion, which also asks the Congress, Senate and the 27 municipalities of the Vega Baja to join.

The plenary session also gave the green light to the free transfer of a plot to the Alicante firefighting consortium to build a new fire station. The socialist councilor Gracia recalled that since 2018 an investment of 2.5 million euros has been planned by the council, in the absence of the land. More critical was Sandoval, who warned that this location is “a kamikaze endeavor of the local government”, since it is in a flood zone. Along the same lines, Miguel Ángel Pavón, president of ASE, and vice president of AHSA, presented allegations for “the geomorphological danger of the land”, linked to the torrential fan of the northern slope of the Sierra de Orihuela and close to the Rambla de Abanilla .

More unanimity led to the appointment of Rocío Caparrós Sánchez as Adoptive Daughter of the City of Orihuela, for dedication to teaching reaching three generations of Oriolanos and Vega Baja. “A lifetime of work and exemplary work with extensive experience in teaching”, qualities that “make her worthy of admiration and respect from her colleagues, as well as the thousands of students from Orihuela and the entire region who have passed through their classrooms in his more than 43-year career, “said councilor Mariola Rocamora.