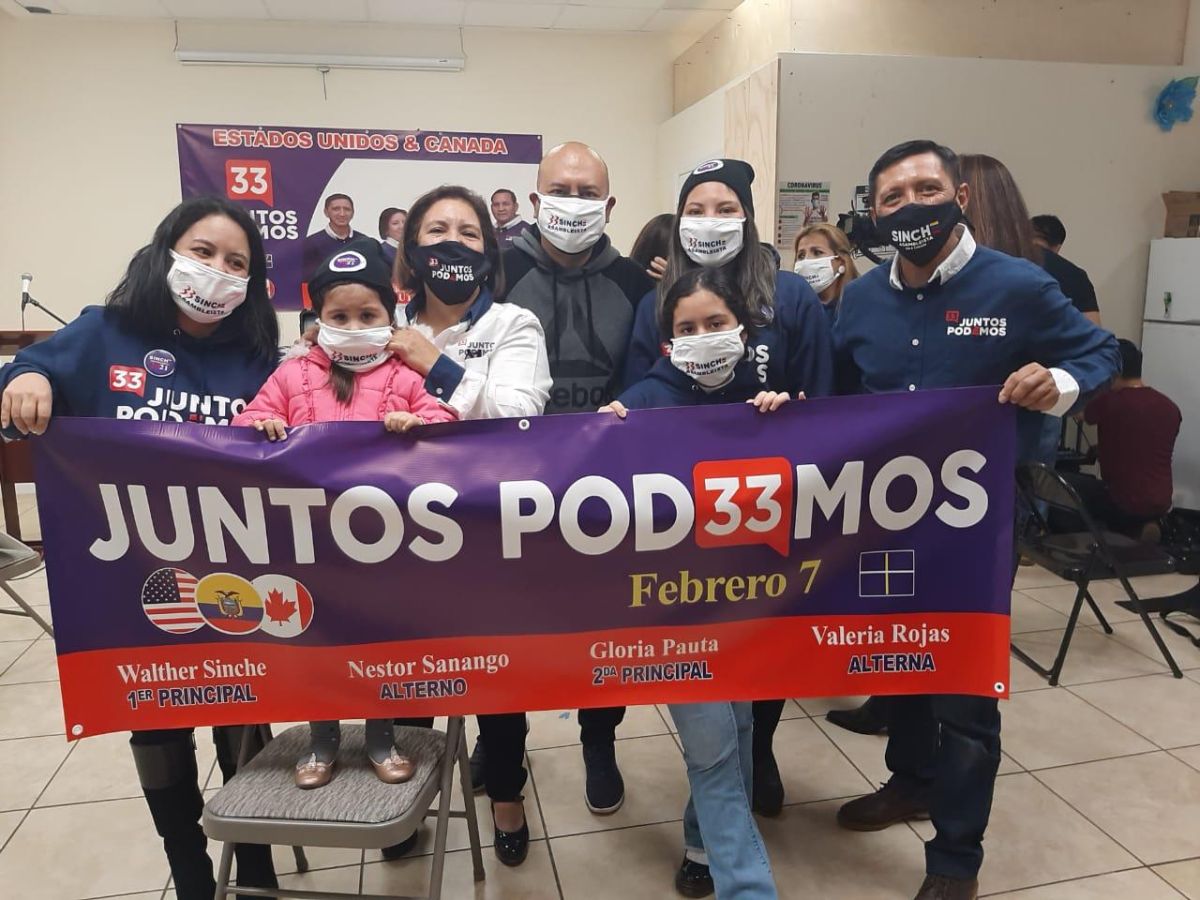 NY.- Community activist Walther Sinche, supported by a broad coalition of organizations, was nominated as a candidate for the Ecuadorian National Assembly on behalf of the Ecuadorian immigrant community in the United States and Canada.

The announcement of the candidacy was made last Sunday in Queens, an enclave of the Ecuadorian community in New York. Sinche is the main candidate for Assemblyman by Ecuadorians abroad for the period 2021 – 2025, for the Juntos Podemos – Lista 33 movement, headed by Paúl Carrasco, as presidential candidate.

“Because of the support received from the community during 25 years of activism in New York, I have the conviction that I am the best option to represent my migrant brothers from the United States and Canada, community activism that I have seen in the other candidates, only in time campaign, ”said Walther Sinche, who was accompanied by the candidates for Assemblymen Néstor Sanango, first alternate; Gloria Rodríguez, second main; and Valeria Rojas, second alternate.

As a defender and promoter of Andean cultural identity in New York, Sinche has generated various events such as the Andean Fashion Show, the “El Chasqui” Run and Walk and La Noche Cuencana, to highlight and maintain not only the Ecuadorian but also Latin American culture.

Sinche also has a long history as a defender in notorious cases of racial hatred and police brutality against Ecuadorian immigrants and Hispanics in general.

“Thanks to the approval of the Hispanic media in the Big Apple such as Univision-Channel 41, El Diario La Prensa and other important institutions, for which I am the benchmark of community activism in this city, my Ecuadorian community has always been valued and highlighted” added Sinche, who not only enjoys the support of the Ecuadorian immigrant community, but also of Latin Americans in New York.

Proposals in favor of migrants

The action plan of Walter Sinche together with the presidential duo made up of Paúl Carrasco and Frank Vargas Anda, from Juntos Podemos — Lista 33, includes strengthening democracy and social participation. Ensure compliance with the rights and freedoms of citizens, ensure security, justice and unrestricted respect for human rights, and in particular of migrants in the United States and Canada.

Sinche announced that it will promote the elimination by legal means of the decree of remittances by creating control mechanisms to avoid abuses, combat corruption and strengthen supervision through citizen oversight of Ecuadorian consulates, consular agencies and government entities that provide public services in this country.

The candidate proposes the revision of the Organic Law of Human Mobility, particularly in the articles that concern migrants and returnees. Similarly, it raises the reopening of the Legislative House in New York, so that citizens are in continuous communication with the assembly members and receive their concerns and projects.

Finally, Sinche said that he has committed himself to continue with the social struggle in favor of migrants, the least privileged and unprotected of our society in this great nation that welcomes them.

‘Together we can achieve change’

Walther Sinche, president and founder of Alianza Ecuatoriana Internacional and the Andean Community Center, together with his “chasquis soldiers” as he calls his volunteers, in this time of pandemic, has provided more than 300,000 lunches to the unprotected in the Corona sector, Queens, thanks to organizations that support and recognize your altruism and work.

“Together we can generate change. We have a program for a diverse, plural and multiform society, but united by love for the Homeland and its well-being, this is what the Carrasco-Vargas presidential duo’s action plan sums up, ”Sinche stressed.