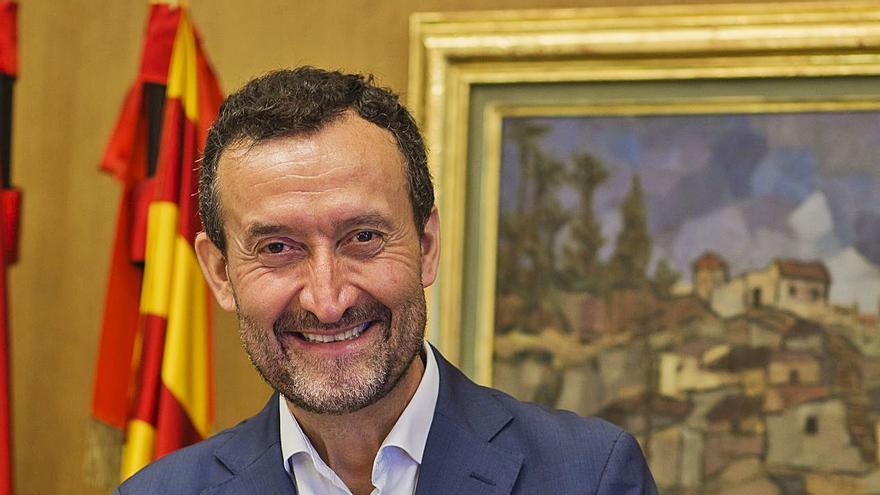 “We are on the necessary path for ‘La Festa’ to intensify its social roots, working above all from educational centers and youth”

Has it been 20 years since the historic date. Do you remember what you were doing at the time when the then Director General of UNESCO, Koichiro Matsusura, announced the distinction?

At that time I was part of the Municipal Government team, and I perfectly remember the nervousness and expectation that the entire city was experiencing, pending the news that should arrive from the UNESCO meeting. We were gathered in the City Hall waiting for the result, we received the call from the mayor, Diego Maciá, and I immediately went to the Casa de la Festa and transferred it to the members of the Board of Trustees who were there waiting for news. I certainly felt immense joy.

What feelings did you feel about the recognition of the Misteri d’Elx as a World Heritage Site?

The first feeling I remember is that of deep pride in being from Elche. Do not forget that just a few months before our historic palm grove had also been declared a World Heritage Site. It was really extraordinary that Elche saw the value of its main hallmarks recognized in such a short time. Both distinctions generated an explosion of self-esteem that was very valuable in channeling the illusions of the future of all citizens.

I consider that there is no such risk. When you receive an international distinction of this caliber you can run the risk of falling into conformism or complacency but, fortunately, that has not happened. It does not suit the character of the people of Elche and, in addition, the Mystery has been and will always be the Festa, the people’s festival, which generates a very unique bond and collective dynamics, which has led to continue working permanently so that it is maintained that oral transmission of knowledge and values ​​that UNESCO distinguished, counting above all on the youngest, so that they know and love our traditions and our language, the great cultural heritage that the generations that preceded us have bequeathed to us.

On this subject, you pointed out as one of the most important lines for the survival of the Misteri the need to work with a long-term vision in initiatives that generate bonding, affection and appreciation for the Misteri in a city that is in transformation and increasingly open. At what moment do you think this work of generating love and social roots among the people of Elche is?

There are several keys but an essential one, as always, is in education. We live in an open, changing and dynamic society, which is why it is essential to create training structures capable of bringing together and integrating everyone, wherever they come from, and of generating collective identity. It is essential that the Festa continue to open up clearly to society, without losing its essence, as this will allow it to continue adding, adding talent and vocation to incorporate the Misteri family and continue to awaken passion, as has happened. along its history. I think that we are on that necessary path for the Festa to intensify its social roots, working above all from the grassroots, the educational centers, the youth.

How has the representation and the city of Elche itself helped and is being a World Heritage Site?

Undoubtedly, the declaration of Oral and Intangible Heritage of Humanity contributed to giving our Misteri an important boost of visibility at the national and international level, a push that still lasts and that we can still continue to take advantage of. Being a World Heritage Site means the worldwide recognition of an exceptional value as well as the need for protection, something that in our case is obviously not necessary due to the extraordinary sensitivity we have with the Mystery. And from the point of view of the city, it places us on the map of landmarks of universal cultural relevance and therefore gives us a global projection and covers the image of the city with a cultural vitola that we must take care of, promote and, also, make profitable.

The Misteri d’Elx has gone through good and bad times throughout its history, especially from an economic point of view. Although its survival is currently guaranteed, what do you think are the steps that those responsible for La Festa should take to guarantee economic viability? And the public administrations?

It is important to emphasize that, from an economic point of view, the continuity of the performances of the Misteri d’Elx is fully guaranteed. This has been the case since the Consell de la Vila, which today would be the City Council, assumed its management in 1609 after the disappearance of the Brotherhood of the Virgin Mary. The Festa also has the support of various administrations, as well as private entities, which ensures its stability and future. Also very interesting is the figure of the Misteri protector who is now promoting the Management Board and which means involving citizens in its financing. I assure you that as mayor I will continue to fulfill my solemn commitment to guarantee the necessary financing so that the Festa is represented in the best possible conditions.

The event coincides in a historical and social moment marked by the covid-19 pandemic, something that forced the cancellation of the 2020 representation. Do you have any news for this year? Do you already work with some celebration hypotheses?

The Misteri d’Elx Board of Trustees has not yet made a final decision on the ordinary representations of next August and we are at the expense of the evolution of the pandemic, which we hope will continue to be positive, so it will be in June when let’s address the issue and make the best decision. There is a lot of desire for Festa, there is a lot of desire to feel those deep emotions that only the Misteri provides, but prudence must still prevail. If they are finally carried out, they will be done following the strictest and most rigorous security protocols, because in no case are we going to put the health of the members of the chapel, the choir school or stagehands at risk, and certainly not the health of the chaplaincy. of the public. In any case, I am convinced that we are getting closer and closer to recovering the representation of the Festa, and that will be the message of hope in the future that we will send to the whole world.