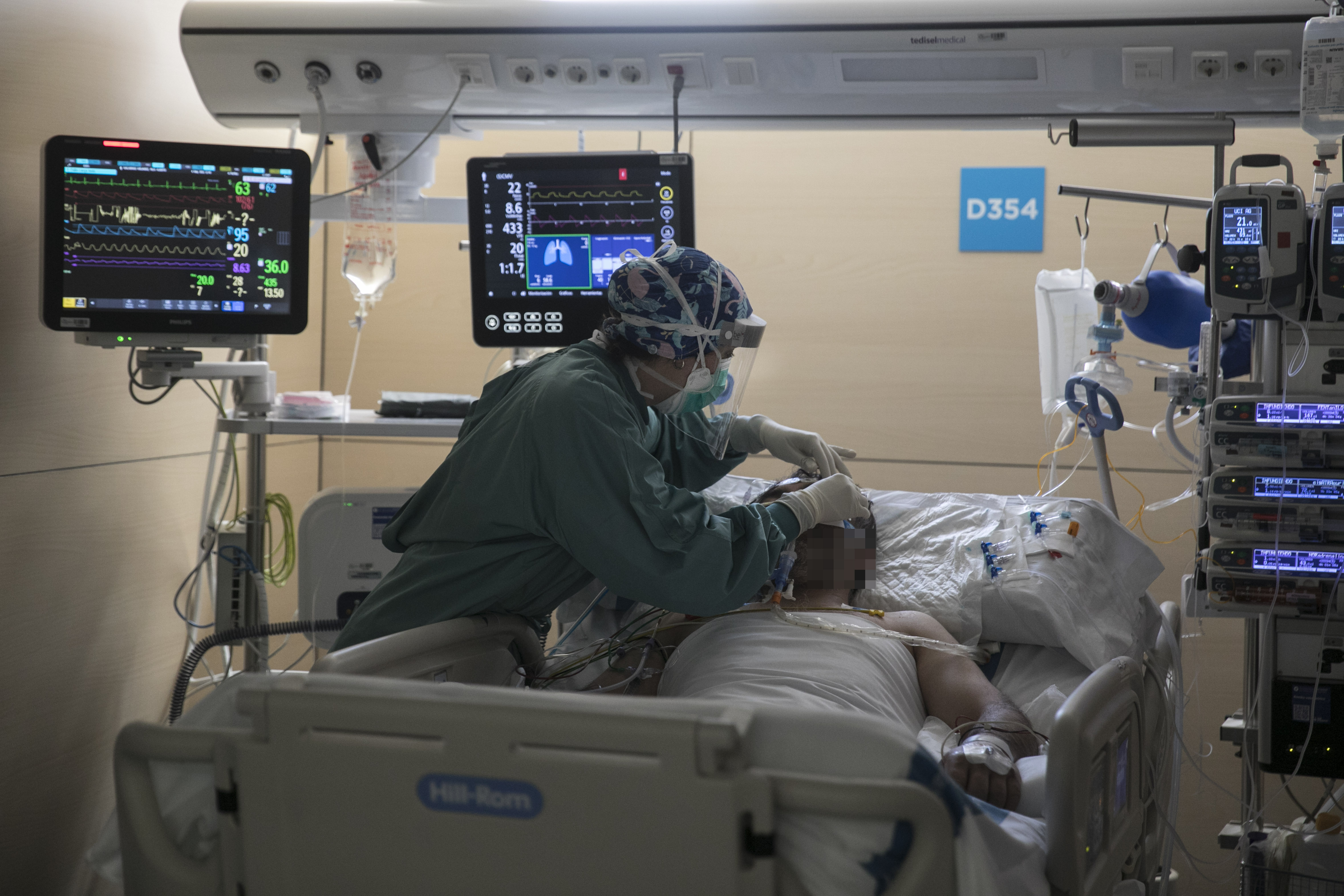 Life begins to gain ground from the coronavirus. Infections continue at very high levels – 173 cases per 100,000 inhabitants – but the advance in vaccination and restrictions to stop the circulation of the virus have cushioned the effects of the covid on the worst parameter of the pandemic: the number of deaths. Since vaccination began to take effect at the beginning of the year, coinciding, in fact, with the peak of the third wave, deaths from the virus have dropped dramatically. The effect of vaccination, which protects against serious illness and death, and the fall in transmission due to imposed social limitations, have accelerated the decline in deaths. Since the end of January, weekly deaths from covid have fallen by 90%.

Spain was facing the third wave when the first vaccines arrived on December 27, 2020. The first advance was anecdotal, only about 10,000 doses were distributed by nursing homes, the centers most affected by the virus and the first on the list of priority groups to protect. Those vaccines required two doses and the first puncture did not begin to take effect until 15 days after being administered, so the month of January passed between two waters, avoiding the challenge of the new wave and vaccinating droppers with the few doses that were arriving. . At the end of that month, just as the third epidemic wave reached its peak – 900 cases per 100,000 on January 27 – the first injections began to take effect and deaths, especially in residences, began to decline.

According to data from the Institute for the Elderly and Social Services (Imserso), in the last week of January 778 elderly people died in residences due to covid. But in recent months and with the residences already fully protected, the number of deaths in these centers has plummeted: six deaths between April 26 and May 2, the last week with consolidated data. “The cases that the third wave had generated were seen in January and February and that could no longer be stopped because the infections had already occurred. It is not until we begin to vaccinate and time passes to generate immunity that infections and cases plummet, ”reflects Daniel López-Acuña, former Director of Emergencies at the World Health Organization.

Vaccination in the general population is slower, but the effects of protection for the most vulnerable age groups – 89% of those over 60 have at least one dose on – already influence the global curve. In addition to residences, those over 80 have already completed the vaccination regimen and coverage with two doses in the 70 to 79 group is close to 50%. All this, together with the fall in transmission due to the social restrictions imposed – there are fewer infections – has impacted on the decrease in global deaths in Spain due to the covid: from 3,722 in the last week of January to 366 on the 26 April to May 2, according to consolidated data from the National Epidemiological Surveillance Network.

“In the general population we do not have sufficient vaccine coverage to break transmission, but as global mortality was closely linked to age, when we cover the most vulnerable age groups, the impact is consolidating,” says Amós García, president of the Spanish Association of Vaccination. In Spain, 20.6 million doses have been injected: 30% of the population has received at least one dose and 13.7% (six and a half million people) have completed the vaccination regimen.

The experts consulted assure that the immunization campaign has been essential in reducing mortality, but it is not the only factor that has contributed to this fall. “In addition to vaccination, restrictions have an influence, causing cases to fall and, therefore, hospitalizations and deaths”, assesses Salvador Peiró, epidemiologist at the Foundation for the Promotion of Health and Biomedical Research of the Valencian Community (Fisabio ). After the relaxation of measures during Christmas, the communities again took severe control measures, such as the limitation of meetings, reduced hours in the hotel industry and autonomous confinements, among others. “In the residences, as of February, what we see clearly is the effect of the vaccines. In the rest of the population it is slower and we see the two factors mixed: restrictions and vaccines. But as vaccination progresses, fewer and fewer older people are suffering from serious illness. 95% of those who died in this pandemic are over 60 years old. If we protect them and get rid of this, the patio changes completely, ”says Peiró.

This combination of vaccination and restrictive measures to lower the incidence has also reduced global hospitalizations by 77%, although in intensive care, the pace is different. “In ICU hospitalizations they do not have the same effect because there has been a shift to younger ages and longer stays,” says López-Acuña. With vaccination, the age of infected and hospitalized patients has been reduced: from 42 to 40 years for those infected and from 63 to 60 for ICU patients, according to Health. “It may be linked to the fact that young people tend to go to health services later and arrive more weakened. And the aggressiveness of the variants is also an element that must be watched ”, points out García. Peiró agrees: “We have a certain perception that the cases that come to the ICU are now more serious than before and we discuss whether it may be due to the British variant, but it has not been studied yet.”

The lower the age of the infections, the lower the risk of entering intensive care, but the stays of the younger groups, qualify the intensivists, are being longer. Some, more than 100 days. And it will be difficult, they add, to empty the ICUs. “They stay longer because they are candidates for everything: they are very young and you have to fight for them until the end. Longer stays are a collateral effect of having decreased mortality, ”Ricard Ferrer, the head of the ICU at the Vall d’Hebron Hospital in Barcelona, ​​told EL PAÍS a few days ago.

According to the data report of the Ministry of Health, in the last seven days 261 people have died. That is, an average of 37 deaths per day, but these figures, although more immediate, are not definitive because there may be notification delays that distort the real count. In fact, only the data collected by the Carlos III Health Institute collected through the National Epidemiological Surveillance Network and which have a slight delay in updating, contemplate more consolidated and reliable information. According to his latest data, between April 26 and May 2, there were 366 deaths, about 52 per day. The trend, in any case, is downward, but there is still a long way to go to reach zero. “We still don’t have people over 60 fully covered and the vaccine is not working 100%. It reduces the risk, but it does not eliminate it ”, justifies López-Acuña. An example of this has been the case of an 84-year-old woman vaccinated in January at the San Prudencio residence in Vitoria where she lived, who has died of covid, according to the City Council on Monday. A Health study revealed that the effectiveness of vaccination in nursing homes is between 81% and 88%: punctures have prevented 71% of hospitalizations and 82% of deaths.

Lowering the death counter to zero, experts point out, is, for now, an impossible undertaking. Especially with the current transmission of cases. “The deceased who appear now are people who have died a long time and are reported now or cases that have been dragging a month or two in intensive care. If you look at them by date of contagion, the curve will surely change, ”says Peiró. In fact, the new cases of deaths reported by Health every day —108, yesterday — are not usually with a date of death 24 hours before, but from previous days or weeks and that communities are slow to report.

“We cannot accept 80 or 50 deaths a day. We have turned the figure into a parameter and we do not see the people behind it. We have anesthetized ourselves. To the extent that we have a high incidence, we will have a degree of mortality: we need to see the incidence fall below 25 cases per 100,000 so that deaths are further reduced ”, alerts López-Acuña. Since the beginning of the health crisis, the Ministry of Health has counted more than 79,000 deaths with a confirmed diagnosis of covid. But the number is expected to be higher, as access to screening tests was very limited at the start of the pandemic and many people died without a diagnosis.