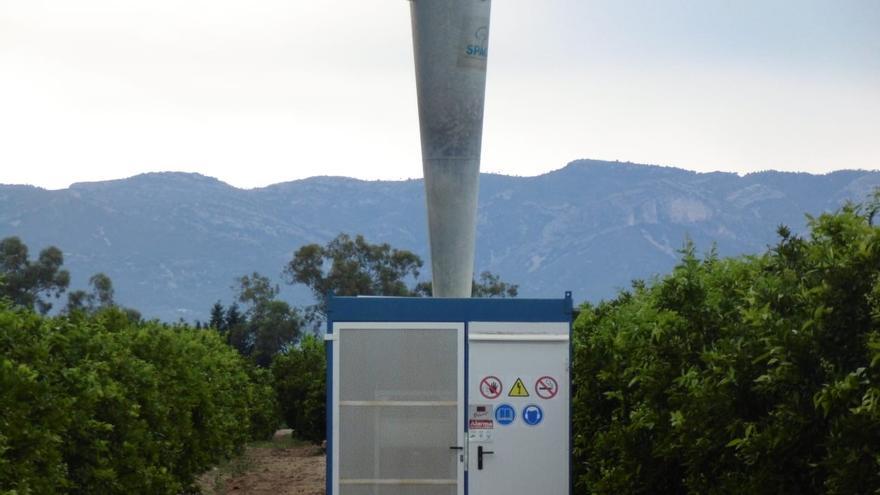 For some time now, the use of so-called ‘anti-hail cannons’, used to prevent hailstorms from occurring and thus preserve crops from this pernicious weather effect. However, these mechanisms have been criticized for the impacts they cause on the environment and on the climate itself, but above all, for the constant noise they cause.

The use of sonic cannons in the Mediterranean area to avoid hailstorms that damage crops “it supposes an alteration of the water cycle” and requires “some type of conditioning or measures” to regulate it, explained to Efe Carles Mulet, senator of the Valencian formation Compromís.

Mulet has asked to guarantee that these instruments “do not have impact on fauna or an increase in the risk of drought” due to its indiscriminate use in fruit farms located in the Ebro and Júcar basins to avoid the damage that hailstorms cause to crops and as an alternative option “to the high cost of agricultural insurance”.

This parliamentarian raised a query with the Senate about the permits for its use by the Spanish administration, the hydrographic confederations or Seprona, but received a response indicating that in the Júcar and Ebro confederations “there is no the granting of any authorization for the use of anti-hail systems such as those shock wave propagation guns in the stratosphere”.

However, its use “has spread in recent years” according to various sources consulted by Efe and, thus, the councilman of Gabarda (Valencia), Paco Sancho, assures that there are at least two devices of this type in the area that they launch “continuous firecrackers every time a hail storm approaches” to undo it.

The download “starts twenty minutes before the storm arrives”, so “for those of us who are close by it is quite a big inconvenience”, he specified.

Along the same lines, the mayor of Ulldecona (Tarragona), Nuria Ventura, has denounced that “There was one night that it was ringing from eleven to five in the morning”, which for the neighbors is “unbearable”.

Only the government can alter the climate

However, from the Júcar Hydrographic Confederation, its Water Commissioner, Marc García, has stated that “they are unaware of the operation and effectiveness” of these cannons, although if they were shown to be really useful “they would mean a modification of the atmospheric phase of the cycle hydrological and therefore the current legislation should be applied to them”.

In fact, the third article of the Water Law clearly indicates that this atmospheric phase “can only be artificially modified by the State Administration or by those whom it authorizes”, which is why his department has opened preliminary investigation proceedings in the cases cited to find out what is happening.

Mulet has insisted that “if someone is using them, it is because they really need them”, since there are farmers “For those who find it cheaper to use this type of device than to hire agricultural insurance”, which “makes you think about how these insurances are raised”.

The person in charge of this area in the Coordinator of Farmers and Ranchers Organizations (COAG) of Valencia, Jorge Mascaró, explained that “agroinsurance in general seems more business for the part of private insurance than for the farmer”, which faces more and more problems of all kinds, especially economic, to maintain their activity.

“Prices are getting higher and higher and, if you charge it one year due to a loss of crops due to hail, the following year they apply a surcharge. of the even higher premium”, he added.

In addition, within the fruit trees, citrus fruits turn out to be the most affected by the hail, since “as soon as it touches the orange, it is not worth” to market it and, in the end, “the situation becomes unsustainable, because the insurance is worth more that the harvest”.

For this reason, Mascaró has asserted, many farmers end up giving up taking out insurance of this type but, not being able to rely exclusively on good weather, seek alternative measures such as, according to Mulet, sonic cannons.

How do the ‘anti-hail cannons’ work?

How does a hail cannon work? Through explosions of acetylene gas and air, these cannons emit shock waves that travel at the speed of sound and interfere with the crystallization of hail, causing it to turn into rain or soft hail that it dissolves easily and does not affect the harvest, according to the portal somostecnofilos.com.

To be effective, the cannon must start firing 15-30 minutes before the storm starts, and once fired, the cannon generates shots every 5-6 seconds.

In many countries, especially in Mexico and Central America, where they are very popular, they have forced the different governments to intervene to limit their use, due to the protests of neighbors, who complain about the loud noises they generate.