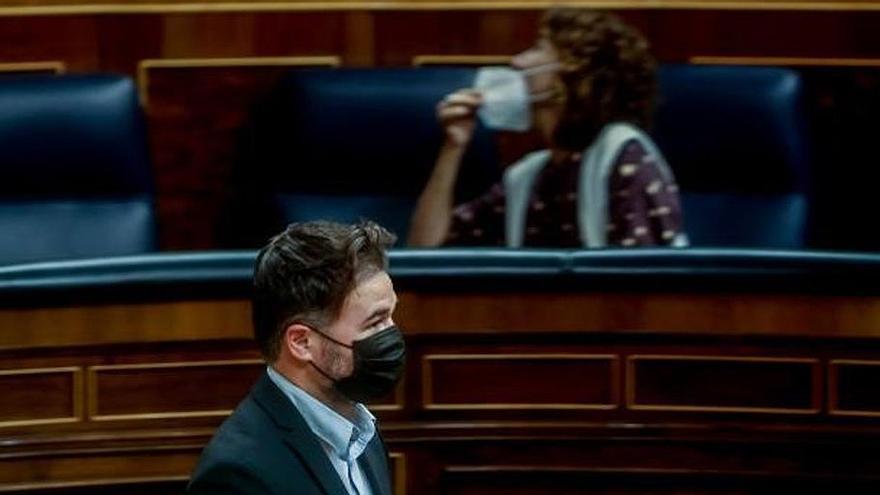 The General State Budgets (PGE) for 2022 are right now in the air. And they are because ERC has already warned, with clarity, that if the Government does not comply with the pact on the audiovisual law, to protect production in the three co-official languages, on all platforms – including Netflix and HBO-, will withdraw its support for the rule and will consider whether to veto the accounts in the Senador. A veto that could prosper in the upper house if it adds the PP and more minority formations – a not an easy challenge – and that the Executive would have a difficult time raising by an absolute majority in Congress.

The Executive recognized this Tuesday, with equal clarity, that the 6% quota for the production of works in Catalan, Basque and Galician is applicable to national operators (Movistar +, Atresplayer Premium, Mitele Plus, Filmin or FlixOlé), but not to those that have their headquarters outside of Spain, in the case of the giants of the sector, such as Netflix, HBO Max or Amazon Prime Video. And although, at the request of ERC, the Government is willing to introduce “improvements” in the text already sent to Congress, and at first it warned that it cannot force foreign platforms because it is prevented by the communication services directive audiovisual.

It is this community norm that the Executive has transposed (with delay), and to which it clings to defend itself against the Republicans. But they say, in turn, that the directive does not close the door to imposing the percentages on service providers on request. After learning about the threat of ERC, the Government graduated its refusal and urged the independence formation to work “together” during the parliamentary process to seek a point of agreement without violating the community framework.

Now, what does Brussels say exactly? The legislation to which the two parties refer is Directive 2018/1808 of the European Parliament and of the Council, of November 14, 2018. Well, its article 13, which is the subject of discord, says in its first section this : “Member States shall ensure that on-demand audiovisual communication service providers subject to their jurisdiction have a percentage of at least 30% of European works in their catalogs and ensure the prominence of such works.” For the Government of Pedro Sánchez, this wording makes it clear that the fees for the protection of European audiovisual works are imposed on streaming operators “subject to their jurisdiction.” In other words, based in Spain.

The transposition of this section into Spanish legislation is the one that incorporates this shielding of Catalan, Basque and Galician: it is said that half of that 30% (15%) must be works in the official languages ​​of Spain and, of that subquota, 40% must be assigned to Catalan, Galician and Basque. 6% of those accounts come out. On the other hand, the reservation that RTVE will have to make for productions in the languages ​​of the autonomous communities will be higher, 15%.

ERC, on the other hand, emphasizes the second section of the aforementioned article 13 of the 2018 directive: “When Member States require communication service providers subject to their jurisdiction to make a financial contribution to the production of European works, in particular through direct investments in content and contributions to national funds, they may also require communication service providers aimed at audiences located in their territories but established in other Member States to make such contributions, which must be proportionate and non-discriminatory “.

The second point refers, therefore, to platforms that are based abroad but that operate and have audiences, in this case, in Spain. But the Ministry of Economic Affairs and Digital Transformation, headed by Nadia Calviño, emphasizes that this section refers to the fact that operators, based in Spain or outside of it, are obliged to produce European works. This is contemplated in the bill, as well as the requirement for all platforms to contribute to the financial support of RTVE.

Budgets and the legislative agenda at stake

ERC also recalls that the directive recognizes the promotion of languages ​​throughout the text. Is underlined the need for Member States to ensure “cultural and linguistic diversity” —Without specifying a limitation—, in addition to pluralism in the media, accessibility, non-discrimination, consumer protection or “fair” competition.

Also Read  Spain at the great energy crossroads: "Here we are anti-nuclear and anti-nuclear, that's not how we got there"

Now, the government knows that it has to find a way out of the labyrinth. For now, the ministers of the Presidency and Finance, Félix Bolaños and María Jesús Montero, as well as the spokesman of the Socialist Group, Héctor Gómez, meet this Wednesday with the head of ERC in Madrid, Gabriel Rufián, to try to reduce the tension and redirect negotiations. Sources of Economy indicated to El Periódico de Catalunya, newspaper of the same group, Prensa Ibérica, as this newspaper, which the Government’s “commitment” to the protection of languages ​​is beyond doubt and that it is now in Congress where meeting points have to be sought, is time to “work together” to reach a consensus. In other words, they will try to speed up the possibilities allowed by the community directive to satisfy all parties without breaking the rules imposed by Brussels.

Rufián did not hide his anger at his press conference late on Tuesday in the lower house: “For ERC the subject of the language is sacred, and touching noses with this excuse is a bad business. “Not only is the support of his group at stake for the audiovisual law, but” all scenarios are open, also in the Senate, regarding the General Budgets of the State “. That is, these could be vetoed by ERC, with the possibility that it would not go ahead. It will not be easy to tie support, but it could happen.”Budgets are very good and necessary for economic recovery. And the audiovisual law is now beginning its process, “they responded in Moncloa, seeking to separate the accounts of the State from the norm approved this Tuesday by the Council of Ministers.

ERC rejects the Audiovisual Law approved by the Government, sees “traps” of the PSOE and threatens consequences https://t.co/C6GrVkifVa pic.twitter.com/ilscDAN7IC

The pro-independence spokesman also warned that the majority itself that allows the bipartisan PSOE and United We can complete its legislative agenda is in danger. “Keeping your commitments to ERC in your best interest“. Republicans hope that a new Executive commitment will be embodied through a document or a public act that links him to the pact, reports EFE.” What we are not going to do is by participating in cheating or trying to make it appear that here it is not nothing happens and that there are multinationals that are free and can do whatever they want. “” We respect the pacts and there is no multinational that has to whisper the laws to the Government, “he added.

In the Socialist Group, Calviño’s attitude also felt bad. At the top they indicated that the first vice president had broken into a very delicate moment, with the Budgets still not closed, undoing an agreement that was already made, all because she was never favorable to quotas, they regret. A position that, however, was always shared by the socialist wing of the Executive, which preferred to encourage platforms with public aid and low taxation.

The Government does not have much time. On Friday, December 3, at 12 noon, the deadline to register the veto proposals ends to the Budgets for 2022 (to the entire text and to the sections), which will be discussed on the 9th. If any of the vetoes were successful – an absolute majority is required, 133 votes – then their processing in the Upper House would conclude and they would return to Congress , that it would have to lift that veto with an absolute majority or, two months later, with a simple majority.