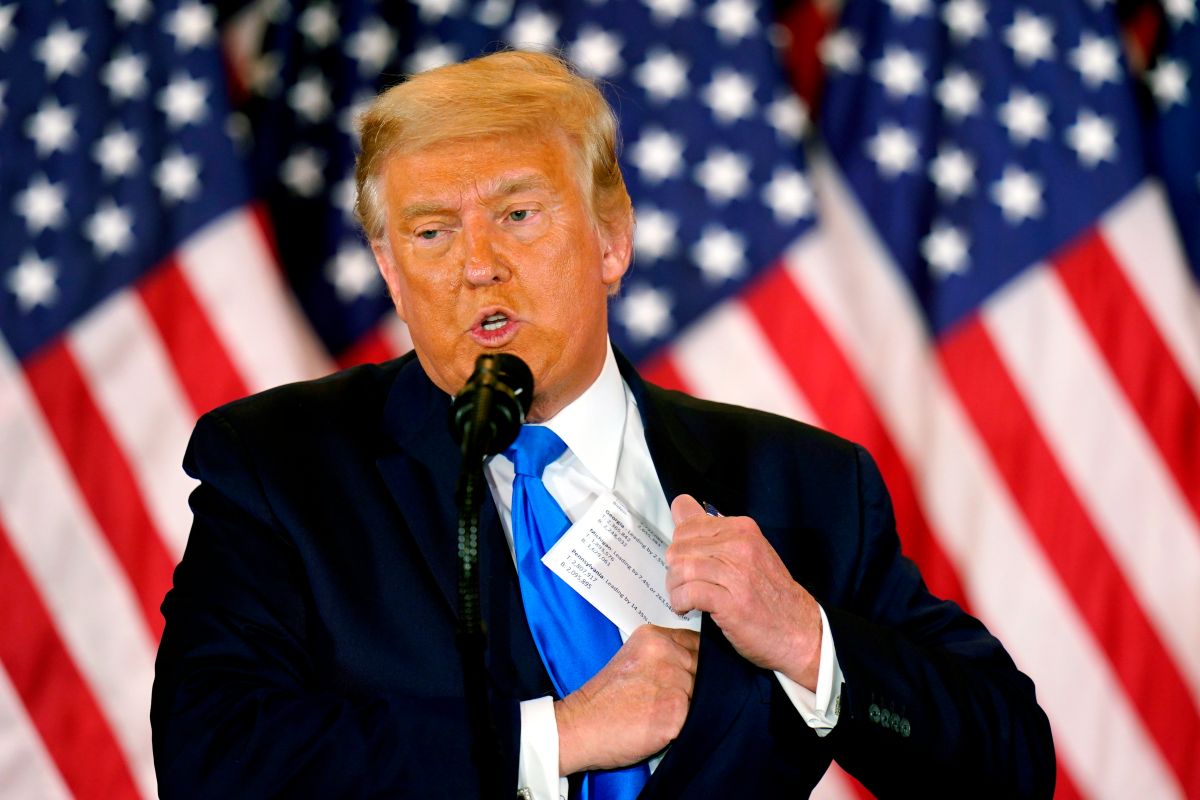 Outgoing President Donald Trump at a press conference the day after the election.

With his defeat in the elections on November 3, outgoing President Donald Trump seems to have forgotten his promises about a new economic stimulus check.

The Republican, determined to deny his disadvantage in the electoral process, has directed his energies in recent days to prove unsuccessfully in court that there was fraud with the vote by mail.

Trump, who seems to be entrenched in the White House without making public appearances, has limited himself to using his Twitter account to insist that he is the winner of the elections, despite the fact that the numbers and the analysis point to the contrary from the November 7 when Joe Biden it was projected as winner after reaching more than 270 Electoral College votes required to become president.

His quest for power is such that Trump does not seem to have time to even think about a new stimulus package that includes a second round of checks like the one approved under the ley CARES.

In the most recent allegations without evidence, the president refers to the decision of the Electoral Board of Wayne County, Michigan, which on Tuesday unanimously certified the results after the deadlock due to the refusal of the Republicans to do so. The results were in favor of his Democratic opponent.

Thus, a stimulus plan promoted by Trump before he officially leaves the presidential seat does not seem to have many possibilities.

Last Saturday, in what appeared to be a strategy for the stands and a response to Biden’s questions about his handling of COVID-19, the outgoing president asked Congress on Twitter to pass a “large” and “focused” stimulus package.

“Congress should now do a COVID Relief Bill. He needs the support of the Democrats. Make it big and centered. Do it! ”Trump said on Twitter.

But there was the call, and, to this date, none of the main leaders in the negotiation process between the federal Legislature and the White House have expressed their willingness to advance the discussion.

Before the elections, the Republican promised a “tremendous” stimulus package while anticipating that the Republicans would take control of the Senate. But, even if that was the case as envisioned, the majority spokesperson in that body, Mitch McConnell it would remain a stumbling block for Democrats, as the Kentucky Republican’s stance on the amount of legislation and where the funds will go is the opposite of his political rivals.

Before the election, Trump failed to convince McConnell to give in to a higher number. The outgoing president had mentioned that he was willing to sign $ 1.8 trillion of legislation. Still McConnell insists on a much smaller amount than before or $ 500,000 million dollars. Democrats are aiming for a package that involves the outlay of $ 2.2 trillion.

The limited information that emerged when Trump was still forcefully mentioning the subject of further relief for Americans included the figure of $ 1,000 per dependent as part of a second round of checks for $ 1,200.