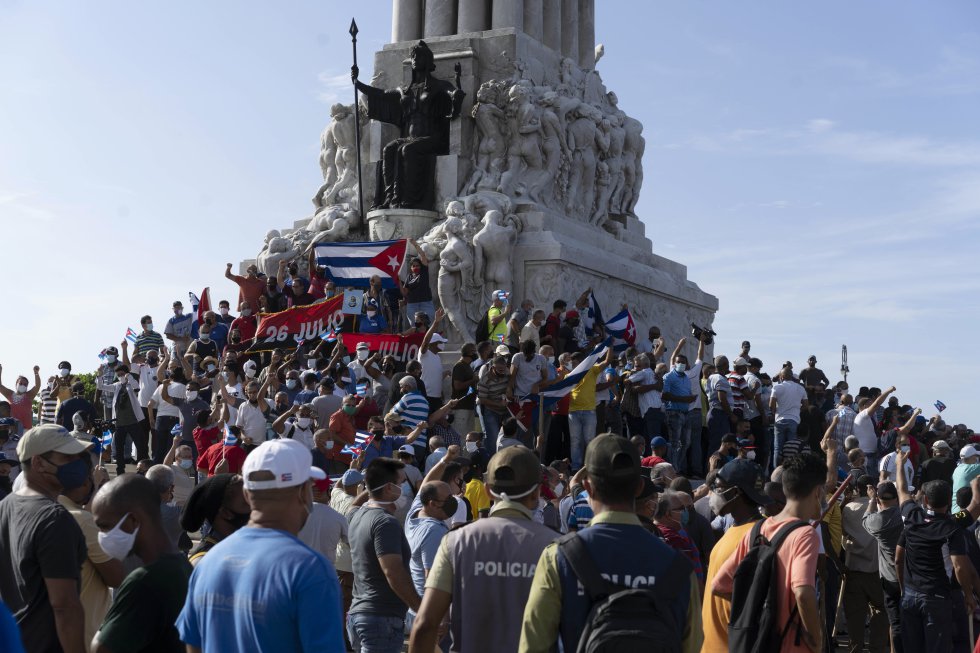 Cuba has lived this Sunday the largest demonstrations in recent decades. Shouting “Down with the dictatorship” or “Homeland and life”, an imitation of the official slogan “Homeland or death”, Cubans have taken to the streets to protest against the explosive mixture of the absence of food and the lack of vaccines against the covid. The economic crisis that the island has suffered for years has been aggravated by the pandemic, which has hit the tourism sector very hard.

These are some of the keys that help to understand how the outbreak has been generated, spurred and amplified throughout the world by social networks, which will have to face President Miguel Díaz-Canel, heir to Fidel and Raúl Castro, the first leader in 62 years of the regime who did not experience the revolution:

Where do the protests arise and what are the protesters asking for? Hundreds of Cubans began protesting on Sunday in the towns of San Antonio de los Baños, near Havana, and Palma Soriano, in Santiago, a spark that later spread throughout the country. In principle, it was a protest against the long blackouts of electricity and to demand vaccination against covid-19. Soon after, the demands turned into cries for “freedom” and demands for political change.

The protest reached Facebook and was broadcast live, with proclamations as unusual as “Down with the dictatorship” or “We are not afraid of communism.” In various points such as Cárdenas, to the west of the island, state stores were looted and police cars were attacked.

The protests have been harshly repressed by the government, which called on the revolutionaries to fight the demonstrations in the streets, with more than a hundred arrested. A Spanish photographer for the Associated Press (AP) agency, Ramón Espinosa, was attacked by law enforcement officers.

How has the covid hit in Cuba? The protests appear to be the result of the exhaustion of the long economic and health crisis, one of the worst on the island, since the maleconazo 1994, during the so-called Special Period, after the fall of the USSR, when hundreds of Cubans came out to protest the precarious situation on the eve of the outbreak of the rafters crisis. The island, which managed to maintain control of the pandemic in 2020 (it only counted 1,500 deaths) and lead the creation of its own vaccine (although with a poor distribution), has seen in recent weeks a regrowth of the disease that places it among the most dangerous in Latin America. On Sunday the authorities reported that there were 7,000 cases and 31 deaths, although the opposition maintains that the real data is much worse and that many areas are on the verge of health collapse.

A stagnant economy. With the economic engine, tourism, totally seized, the incidence of the coronavirus has been added to inflation, blackouts, shortages of food and basic products. In 2020, the economy contracted by 11%, the worst figure in three decades, and at the beginning of the year the Cuban government proposed a new package of economic measures that increased wages and pensions, but also prices. In the absence of foreign exchange, stores in freely convertible currency have been created —you can only pay with a credit card— where food and electrical appliances are sold, while in Cuban peso stores there are fewer and fewer products. Since last month, dollars in cash, the main currency in which citizens receive their remittances, have not been accepted “temporarily”. Havana blames the situation on the US embargo.

What has been the reaction of Havana? In the official Castro line, the president of Cuba, Miguel Díaz-Canel, has not hesitated to blame Washington for the protests. In a live broadcast on Cuban radio and television, Díaz-Canel, accompanied by members of his Executive and the Political Bureau of the Communist Party of Cuba (PCC, the only legal one), assured this Monday that his Government seeks to “confront and overcome ”the embargo decreed by the United States, which worsened during the presidency of Donald Trump (2017-2021). He has also said that the riots sought to “fracture the unity of the people.” Therefore, he added, the protesters “have gotten what they deserve”, alluding to the repression of the protests. On the same Sunday, Díaz-Canel already announced that “provocations will not be allowed” and pronounced the famous mantra of Fidel Castro: “The street belongs to the revolutionaries”. The current president of the United States, Democrat Joe Biden, has expressed his support for the Cuban people and their peaceful protest.

Where does the slogan “Homeland and life” come from? Shadowing the official Castro slogan, the rap Patria y vida has become the soundtrack of the protests. Work of Cuban rappers Maykel Osorbo and El Funky –who live on the island– along with other musicians exiled in Miami, such as Gente de Zona, their irreverent lyrics (“Let’s no longer shout ‘Patria o muerte’, but ‘Patria y vida’ ”) And a powerful launch video in which a drawing of the Cuban hero José Martí and a dollar are burned (“ Exchanging Che Guevara and Martí for the currency, ”the song says), in addition to showing the dissidents of the San Movement Isidro, have had a greater global impact since his departure in February than previous manifestos.

Cuba after the Castros. It is the first time in the 62-year history of the Castro regime that the government and the leadership of the PCC are aligned around a civilian and a new generation of leaders who did not fight in Sierra Maestra. After the death of Fidel Castro in 2016 and the subsequent withdrawal of Raúl Castro as first secretary of the Party in 2021, Miguel Díaz-Canel, who had already served as president since 2018 and will be succeeded as head of state in 2028, has before him the difficult task of retaining power in the hands of the party at a critical juncture. For this there are two key men with a business career: Prime Minister Manuel Marrero, who was in charge of Tourism, and Luis Alberto López-Callejas, in command of GAESA (the Army business group).