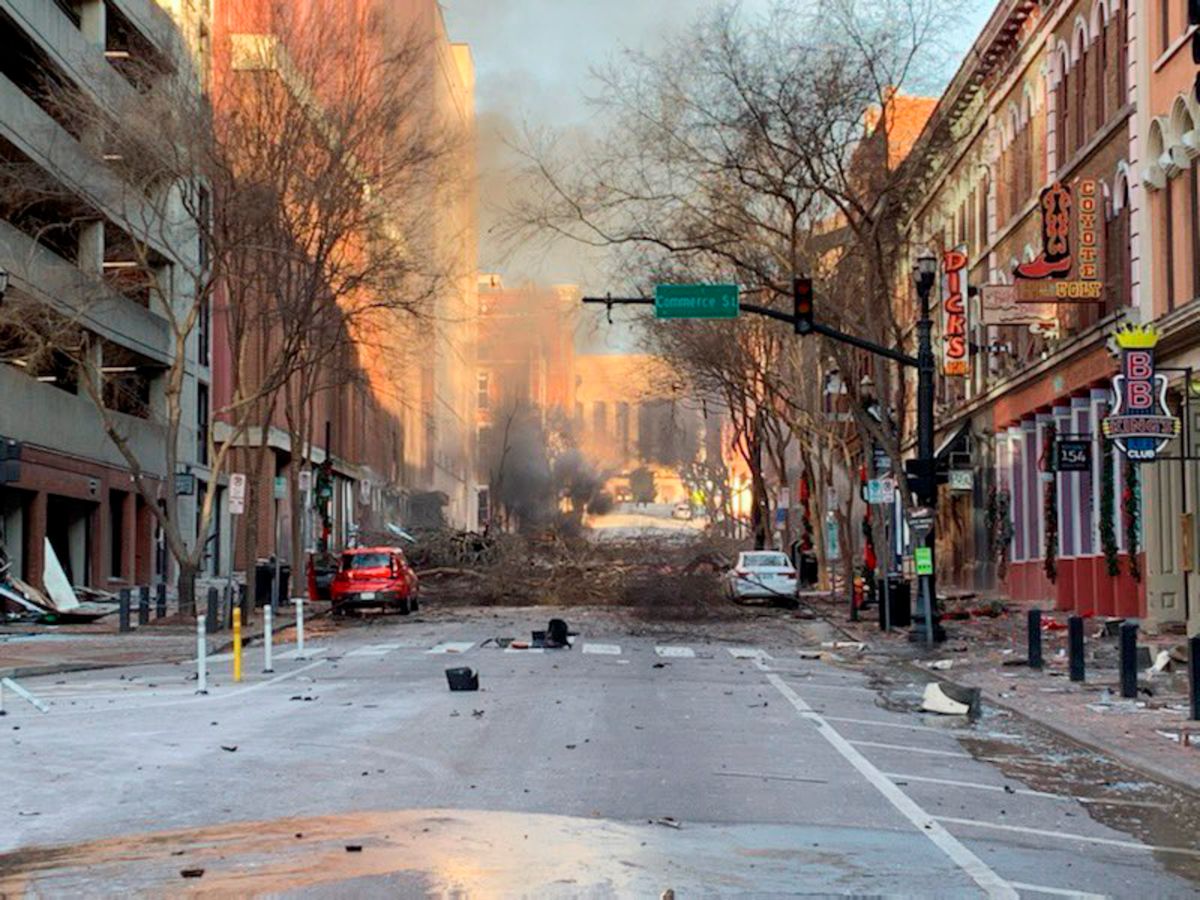 A camper with a bomb shook downtown Nashville early this Friday, Christmas Day and left three injured, in addition to dozens of damaged establishments, broken glass and fallen trees.

Authorities have not yet identified a person responsible, although several people are being questioned at the Nashville Police Station, the capital of the southern state of Tennessee.

At a press conference, the local police chief, John Drake, explained that the city center is being searched, whose streets have been closed to the public, but that there are no indications that there is any other explosive device.

A camper with a recording

Shortly before 6 in the morning, the Police responded to a call that alerted of shots in the zone; But, once they got there, they didn’t see any signs of a shooting and they realized that there was a suspicious vehicle that was parked in front of an AT&T telecommunications company building.

That vehicle had a recording that warned that “a bomb would explode in the next 15 minutes”, Drake indicated.

Immediately, the agents rushed to knock on doors in all the buildings to evacuate the neighbors and 30 minutes later, the explosion occurred.

Local televisions showed a video that comes from surveillance cameras in the area and in which an audio is heard warning of the explosion. “If you can hear this message, evacuate the area,” says a voice during the video, which also captures the explosion seconds later.

“An intentional act” with significant damage

At the same press conference, Nashville Police spokesman Don Aaron indicated that it is not yet known if someone was inside the motorhome when the explosion occurred.

Aaron affirmed that it is an “intentional act” and assured that there is “significant” damage in the affected area with fires that had to be extinguished by firefighters, fallen trees and dozens of establishments with broken glass and black walls due to smoke.

Local televisions have shown images that show the extensive destruction caused by the explosion in downtown Nashville, the tourist heart of the city that is full of bars, restaurants and establishments where you can listen to live music.

3 injuries and problems in telecommunications

At least 3 people were injured and transported to nearby hospitals, but none are in critical condition.

In addition, the force of the explosion knocked down one of the agents who had come to the scene and another lost the ability to hear temporarily, local police said.

Because the explosion occurred near an AT&T building, thousands of people in Nashville and nearby areas are experiencing problems connecting to the internet or making calls with their cell phones, according to the Downdetector portal, a site that shows outages in real time. in all kinds of services.

Some Police departments, such as those in the towns of Murfreesboro and Knoxville, have reported that they cannot receive calls on their 911 emergency service, so they have put other phones at the service of the population.

The Federal Bureau of Investigation (FBI) will lead the investigation in which multiple law enforcement agencies are participating, including the Nashville Police and Fire Department, as well as the Alcohol, Tobacco, Firearms and Explosives, specialized in bomb attacks.

The FBI is the agency charged with investigating possible federal crimes, such as acts of terrorism.

The outgoing US president, Donald Trump, who is in his private club in Mar-a-Lago (Florida), was informed this Friday of the explosion and will continue to receive updated information throughout the day, he said in a communicated one of the spokesmen of the White House, Judd Deere.

Relevant information has also been released to US Attorney General Jeff Rosen, who has asked the Justice Department to make himself available to local authorities to assist in the investigation.

The governor of Tennessee, Republican Bill Lee, promised on Twitter that he will dedicate all the necessary resources to clarify what happened.

The Tennessee Red Cross is working with local authorities to offer shelter to residents who have had to leave their homes because of the blast.