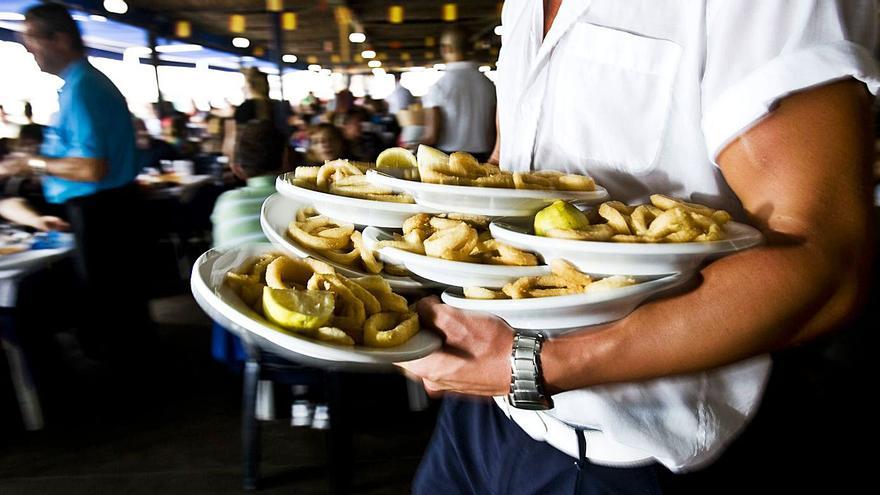 They say that the staff is ” comfortable ” with ERTE, can one be comfortable with ERTE with which the bills cannot be paid because the hours for which these waiters and waitresses were quoted were not the real ones? And what about all that high percentage of hospitality workers who have been in the underground economy who have not had access to the ERTE. With all this, the extreme temporary nature of the sector has made it easier not to renew precarious temporary contracts than to include staff in an ERTE.

Throughout the pandemic, the problems of the hotelier employers have been heard. The slogan “ Let’s save the hospitality industry ” went viral, but to save we must take into account who makes it real, the waitress who works long working hours, that waitress who, of the ten hours she works a day, only charges, in the best of the cases, eight; that waitress who is not sure of the time when she will leave work and cannot reconcile with her personal life, because in hospitality “you know when you come in, but not when you go out”; that waitress who during the summer at most, and with luck, will work one day a week and cannot afford to claim her two consecutive days, because the temporality that characterizes this sector prevents the workers from raising their voices in defense of their rights, because the salary depends on the three summer months.

Another issue is that of the qualification of the personnel. For a part of the management, in addition to the fact that there are no waitresses or waiters, there is no professionalism or lack of training. And they say it in a place where CDTs and hospitality schools have the highest level. The problem continues to be the lack of recognition by some employers of basic labor rights: salary, agreement, professional group, working hours, … We have great professionals with excellent training who, due to the conditions of the sector, have to find another way to earn a living.

They have talked about saving the hospitality industry, but the sector had to be saved before the pandemic. A part of the business community, not all, is the one who turns it into a precarious sector, who makes the cut of labor rights profitable. The pandemic has prompted the adoption of measures that have slowed the economy; what is not acceptable is that some people pretend that, once again, it is the working class that pays for the broken dishes. If the business depends on low wages and precarious conditions, it is not business, or, rather, in those cases, the business is not hospitality but labor exploitation.

In addition, what the sector must demand, in addition to employment with rights, is to end the unfair competition that is represented by that part of the business community that is very comfortable with the underground economy and that entails significant damage to companies that do have their staff. well hired and under the framework of a collective agreement. The employers should speak out in this regard, in favor of labor rights and the rule of law in a sector with chronic labor fraud. An example: a waitress talking about the five euros per hour of work that generates a “legal” salary of 200 euros a week, that is, 800 euros a month and “take it or leave it.”

A good part of the hospitality staff has been punished since before the pandemic. They have been massacred with partial contracts that do not reflect the reality of the hours worked, they have been left in the hands of the underground economy; It is not surprising that they are now vindicating themselves by rejecting precarious contracts and that they continue to be condemned to unworthy benefits and pensions. A situation that has been normalizing and, practically, assuming: in Hospitality employment is precarious (Rajoy’s own labor reform legalized some unfair situations). Perhaps it is a good time for the whole of society to make self-criticism as a previous step to the necessary dignification of the working conditions of the sector. Statements such as those that have prompted this writing should be an invitation to the Labor Inspectorate to visit these establishments.

Hospitality personnel also need to “save the hospitality industry” but based on labor inspections, compliance with the agreement, remembering that this sector includes a large percentage of women and young people, a youth without a future due to the conditions precarious to which they are condemned. Once again, precariousness has the face of a woman and a young woman.