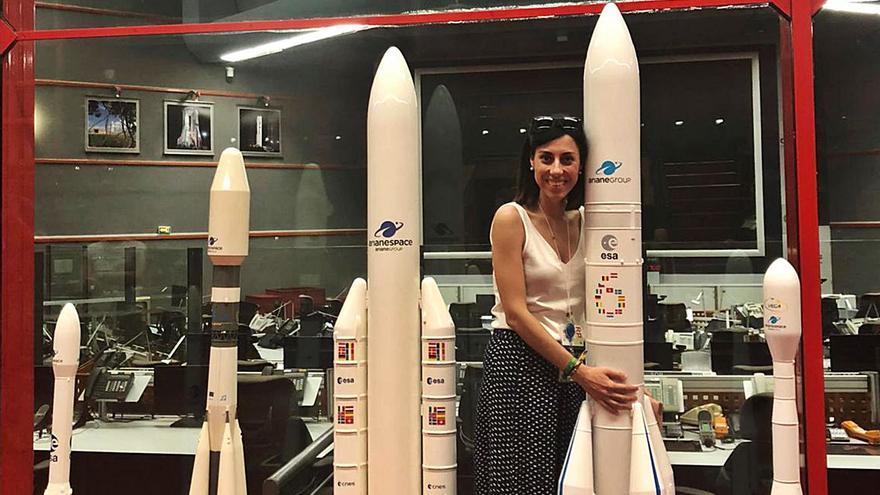 Constellations, stars, planets, galaxies and everything related to space always interested Paula Mas. And this 37-year-old crevillentina had clear since she was a child what she wanted to be: aerospace engineer. And encourage other women to enter the wonderful world of science.

Although his mother tongue is Valencian, in his daily life he alternates French with English, the language used for documentation and official reports. Dynamic and with great attitude, she emphasizes that en the scientific world, “there are not many of us.” And the numbers prove him right. “Two years ago I did some calculations on the percentage of women in science and we were between 20 and 25%. Now, things are evolving, they are not like before, but we are still few “, he clarifies.

There is still a long way to go. This aerospace engineer is well aware of that. “In my work, when we are together, virtually due to health measures, many times I stare and I am the only woman of about 15 participants.” This is accentuated in the technical part, where that 25% is reduced and remains stable in the part of management and quality.

She considers herself privileged “for being in this company, I like my job.” With her example, “we have to open paths” to achieve a balance between men and women in companies, “something difficult when the number of women in universities is lower.”

His message is clear: «From public institutions and the family environment we must encourage and motivate women to study science, which is exciting. Do not be afraid, science is not a closed world, on the contrary, it is very interesting. Limits have to be broken down ”, he says.

To achieve her goal, this engineer moved from Crevillent to Madrid, where she completed her university studies, which she completed with an Erasmus in Toulouse and a master’s degree in the United Kingdom. After completing his academic preparation, he began his working life at Airbus Spain, with his mind set on France, at Les Mureaux, at ArianeGroup. Closer and closer, he came to the French country to work at the French Space Agency and from there, he went to ArianeGroup, where he has been for four years. Takeoff begins.

In this Franco-German company they are working on the European launcher Ariane 6, which plans to start flying in 2022. But, before all this, a series of rehearsals to qualify the launcher and be ready for the first flight. This testing process is carried out through pre-campaigns and campaigns to ensure that everything is ready. Paula’s job consists “of preparing the campaigns, organizing the design and once in Kourou, at the launch base, taking care of the assembly and if there are any problems, providing solutions so that they can continue operations,” she says.

The last pre-campaign was in October 2020. In the almost three weeks that it was there, “the tests with models that represent the flight parts began and thus verify that all the assembly was correct and worked”, he says.

By phone and from her home in France due to the curfew in the country, Paula explains to this newspaper the upcoming actions in space. The next campaign will be in April. Even French Guiana will travel again to settle there for four weeks. During this time, the assembly and transport tests of the highest part of the launcher, where the satellites are placed, will take place. In next month’s tests “we are going to put a lot of instruments on the model and monitor it to see what happens during all the phases: assembly, assembly and transport.”

The components of the Ariane 6 arrive in pieces at the Kourou Space Center. «At the base there are facilities to carry out the final assembly, then we will take it to the launch area, where there is also some small assembly and move it to put it vertically, an operation that must be followed and check that there is no trouble. From there, it will fly “, he points out.

This engineer explains that “the main tests serve to verify that the assembly is correct and everything is fine. In the first part are the objectives, that the assembly is adequate. In Kourou the facilities are new so you have to check that they can accommodate the pitcher without any problem. While in the transport of the Ariane 6 to the launch area, in this process, the tanks have to be pressurized and check during that course that they have good pressure ”.

Once put in the launch zone “A lot of disconnection checks have to be carried out, also taking into account the hydraulic connections to fill the tanks with oxygen and liquid hydrogen at a very low temperature, an operation carried out at the last minute.” Not forgetting the main motor, with which «we will do tests and simulate problems to verify that everything is going well: telemetry, ignition of the main motor and electrical and hydraulic connections. In summer there will also be another test campaign with the models to make sure that everything works correctly.

All this is under the supervision of Paula, who directs this campaign of tests and trials so that it can be launched into space in 2022, according to the scheduled date. A term that has not been delayed with the covid, although the virus did catch them all “with a changed foot.” The workshop activity was paralyzed for two weeks and then resumed at a slower pace. Now everyone works from home and the meetings are telematic. It’s all a matter of adapting to the circumstances.