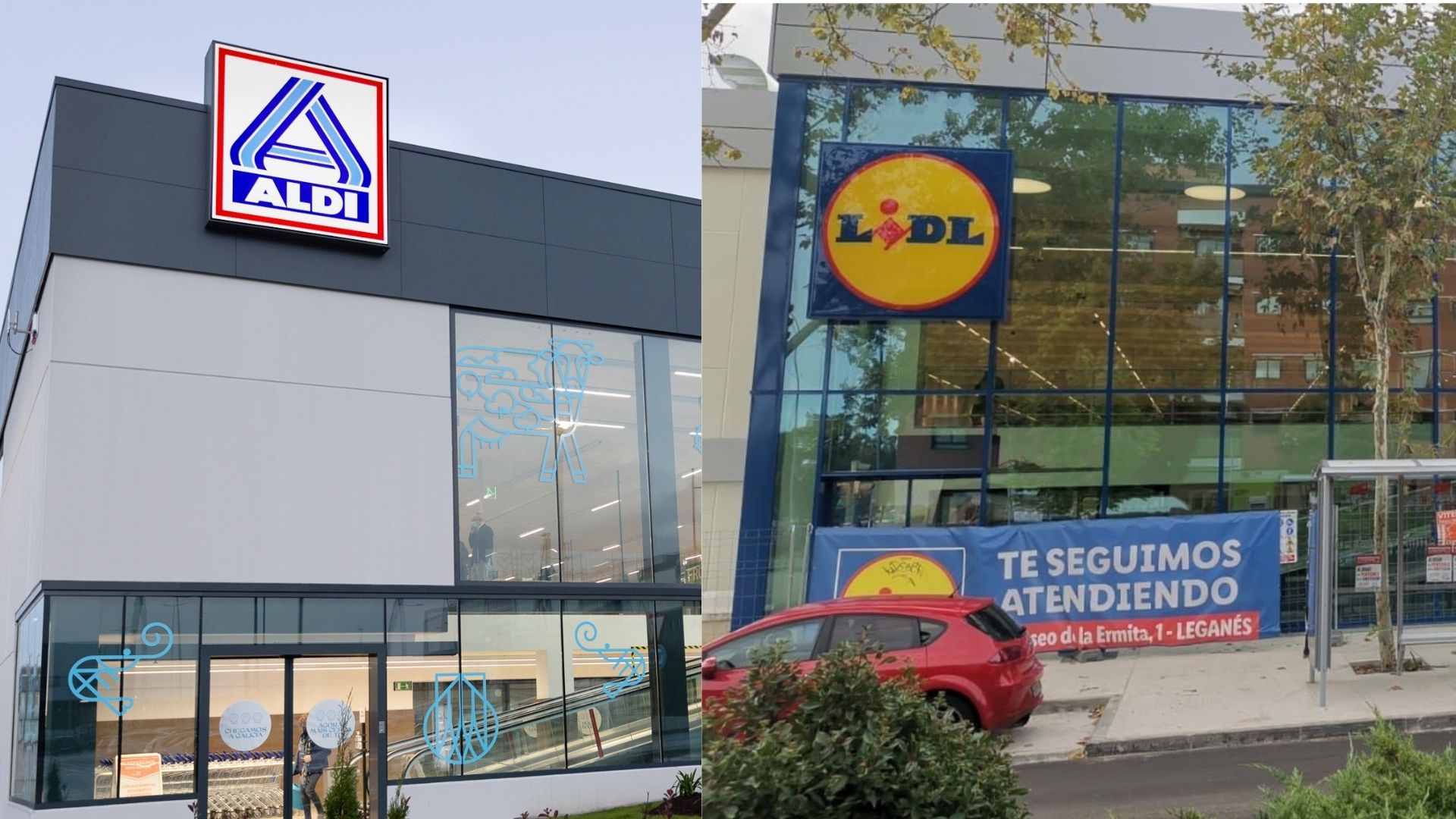 Lidl and Aldi are the two large German supermarket chains that operate in our country. If you have bought in the establishments of both companies and frequently see their promotional brochures, surely you have noticed that they are extremely similar.

First, both have short and very similar names, sharing a good part of the letters that compose it. The corporate colors are also in the same line, and the interior decoration of their premises is also quite similar, simple and austere.

Both Lidl and Aldi They offer seasonal promotions that last a few days. Each week, both chains announce that they are going to put certain products on sale, and once the promotion is over, the items will be withdrawn from supermarkets.

In fact, sometimes the theme of these weekly promotions is the same in both networks, coinciding on the same days or on very close dates the week of gardening, home decoration or collections of household appliances.

But why do they have so many similarities? What are the reasons why the two large German supermarkets are so similar?

We are going to review the history of Aldi and Lidl and analyze their similarities.

History and curiosities of Lidl and Aldi:

Lidl or Aldi, who came first?

To understand why the two German supermarket chains have so many similarities, first Let’s briefly review the history of Aldi and Lidl.

The first to appear on the scene was Aldi. He was born in Essen, a small German town, in 1945. It was then that the brothers Theo and Karl Albrecht decided to take over the food business that their family had run since 1913. They chose the name of the store using the first syllable of his last name, Al, and the letters Di of the word Discount, forming the Aldi that we all know today.

As the company explains on its official website, since its inception the company’s objective has been to get to know the customer well in order to offer them what they need at the best price. Finding themselves in the harsh context of the economic crisis after the Second World War, this philosophy was translated into satisfying the basic needs of the neighbors at very low prices.

And it is that, while the food businesses of the time applied discounts through coupons or special promotions, At Aldi, direct sales were made on all items and more competitive prices were offered. This was possible because the Albrechts cut costs by cutting spending on advertising, rent and maintenance of their premises, and the sale of fresh produce.

This pricing policy paid off and allowed Aldi to expand throughout Germany rapidly: by 1950 they already had 13 stores and 10 years later they had more than 300 stores throughout the country.

In 1961 there was a disagreement between the brothers related to the sale of tobacco in supermarkets. This led to division of the company into two subsidiaries: Aldi Nord, which was left in the hands of Theo, based in Essen and operating in northern Germany; and Aldi South run by Karl, based in Mülheim an der Ruhr and operating in the south.

Do you have an Aldi supermarket nearby? Then pay attention to these Quigg brand appliances that you cannot miss.

However, despite this division, Aldi functions as the same company and, except for the offers that apply, there are hardly any differences between the two factions.

The division affected the subsequent international expansion, and the franchises in the different countries depend on one or the other faction.

The company is present not only in Europe, but also in North America, where Aldi acquired the American discount chain Trader Joe’s, and in Australia.

For example, Aldi’s division in Spain belongs to Aldi Nord. The franchise landed in our country in 2002 and, despite its advertising efforts, its expansion in our territory is being slow and for the moment it has not managed to sneak in among the large supermarket chains.

Lidl is part of the Schwarz Group, which was founded in 1930. However, it was not until 1973 that the company’s first discount supermarket opened in the German city of Ludwigshafen-Mundenheim, when Aldi was already fully consolidated.

Within the Schwarz group, Lidl kept the discount stores, while the Kaufland brand was created for the hypermarkets. Lidl stores spread quickly and by 1988 there were already more than 450 stores in West Germany alone, and this figure doubled with German reunification.

If you want to equip your kitchen at the best price, don’t miss this selection of the best cheap Lidl appliances available for less than 40 euros.

International expansion began in 1989. France was the first country to host Lidl supermarkets, and landing in Spain occurred in 1994 with the opening of the first store in Lleida. In 2019, the franchise celebrated its 25th anniversary in our country with 14,000 employees and 580 stores, and in 2020 another milestone took place with the opening of store 600 in Tres Cantos (Madrid).

Since its arrival in Spain was prior to that of Aldi, Lidl is currently more established in our country and enjoys a greater market share. According to Kantar data, today Lidl is the third most important supermarket chain in Spain with a distribution market share of 6.6%behind Carrefour with 8.9% and Mercadona with 24.9%.

But, what is the secret of the business model followed by these two German chains? Jan-Benedict Steenkamp, ​​a professor at the University of North Carolina, and Laurens Sloot from the University of Groningen, detail the pillars that support the success of this model in their book Retail Disruptors: The Spectacular Rise and Impact of the Hard Discounters .

As reported by El Economista, The business model that allows the retailer to offer very aggressive discounts on all products is based on four fundamental pillars.

The first is that there are few references per store and a high volume per reference.. While conventional supermarkets have between 40,000 and 50,000 references, in discount stores this figure is reduced to 2,000 or even less. Thanks to this, logistics and replenishment costs are lower, which allows them to offer more competitive prices.

The rigorous control of the costs of the establishments is the second pillar on which the business model of Aldi and Lid is based. Discount supermarkets save the most on the rent of the premises, decoration and personnel. The products can be presented directly on the transport pallets, the appearance of the premises is not as neat as in conventional stores, and advertising spending is also controlled.

In this section it should be noted that, in recent times, Lidl and Aldi establishments have experienced improvements compared to what we could see years ago. Today, the two chains invest more money both in stores and in staff and advertising.

The third pillar highlighted by Steenkamp and Sloot in their book is the long-term relationship these companies establish with their suppliers. Compared to traditional franchises, discount chains offer more stable contracts that are not based solely on price.

Finally, the business model of Aldi and Lidl is a success because the corporation recovers the investment of each store very quickly.

By saving on staff and facility costs, the company pays for itself in an average of two years.

White brands, seasonal campaigns and limited units, a strong claim for the consumer

Both Aldi and Lidl follow the same strategy to win over consumers, which is based on marketing of white brands with good value for money, seasonal campaigns and limited units of the products.

Unlike what happened years ago, on many occasions supermarkets’ own private labels enjoy a better reputation than commercial brands. Mercadona knows this very well, but Aldi and Lidl also have recognized white brands, such as Cien creams or Lidl’s SilverCrest appliances, or Aldi’s Milsani dairy products.

Seasonal campaigns and limited units of products are another of the great claims for consumers. The two supermarket chains offer certain items only in limited periods of time and put few units on sale.

In this way, they put pressure on customers that leads them to buy products in a hurry to get hold of them before they run out.

The main differences between Aldi and Lidl

As we said in previous points, In Spain today, one of the big differences between Aldi and Lidl is market share.

Lidl is in third position in the distribution market, while Aldi is not yet among the main supermarket chains operating in our country. Little by little it is expanding, opening new stores and gaining customers.

However, the main difference between the two companies is another. We talk about online sales: Lidl exploits its website and its mobile app for the sale of products from its bazaar, while Aldi only sells in its physical stores.

With this movement, Aldi intends to attract the public to its establishments. Thanks to this, customers who go to buy the trendy cheap appliance, such as the oil-free fryer, may end up taking other products from the store as well.