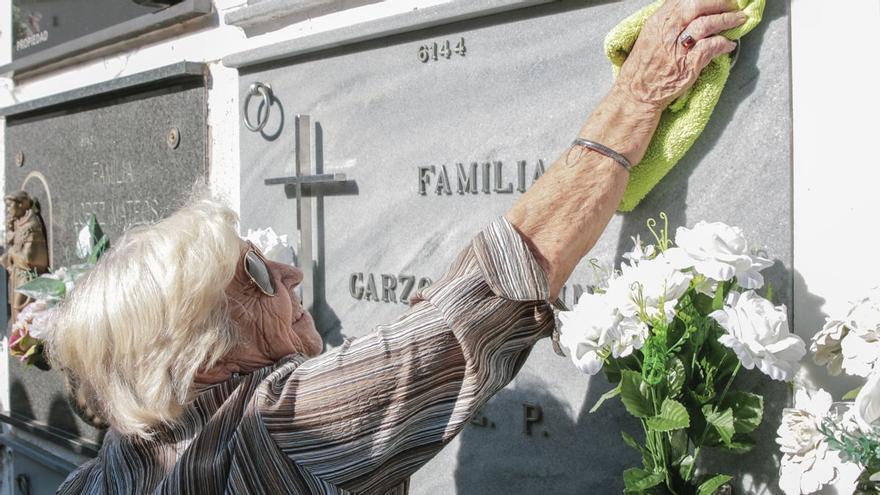 “What I have here is the love of my life.” You just cleaned the niche and put in new flowers. He does it every 10 or 12 days. Or every week. “Sometimes I go worse than I come, because I realize that there is nothing. It is a wound that does not heal. In 14 months I lost my mother, my father and my husband” she says while her eyes are moved. “When someone tells me that I was a very young widow and that I could rebuild my life, it bothers me. I respect that everyone does what they want, but let’s see if they find out that I’m still in love with him“. Trinidad Gómez Rodríguez was then 54 years old, now 68. Since then her visits to the old cemetery of Cáceres are regular.” I don’t like to come when everyone else does it because I don’t want them to see me, I have a bad time. ”

Next to her, a friend of the same age, Pastori Galán Mañanas, also a widow, nods her head. “It hurts a lot,” he says. “If you don’t come for a week, you don’t seem to feel well. I have a photo of him in the dining room and I’m always talking to him: about my granddaughter, what he’s missing …“, he says.” They will say that we are stupid, “says Trinidad.

It is Thursday mid-morning, the eve of the All Saints holiday, and there is a long line to buy flowers at the door of the Cáceres cemetery. “People are taking advantage because they have given rain. And others will also want to go on a bridge,” says Ignacio Iglesias Pavón, 79 years old. “I only go once a year, around this time, because this is very sad, it brings back memories … And also, things, in life.” He is accompanied by his wife, Victoria Garzo Martínez, 75 years old. “Before I was very nostalgic, but later, I don’t know … They had to open my father’s niche to put my mother in and what was inside there was not what I had known … I was 13 when he died. It was a heart attack, what they now call a stroke, “he says.” But hey, at the end you come, you see the tombstone, and it reassures you that it’s still there. ”

Next to them is María Concepción González Cebrián, 87. She was also widowed very early. “At first you come a lot because of the pain you have. Being here seemed to cheer you up. Now it is very sad because I will soon … “, he says pointing to the niches.

The three agree that they continue to come every year at this time out of pure habit: “Because everyone comes, so that at least the tombstone is clean and has flowers, although we already bring them in plastic so that they last longer,” summarizes Victoria.

Just before the visit to the cemetery they went to get the third dose against Covid. “They called us from the health center,” they say. They just got the puncture from Pfizer, they don’t want the flu shot. “We have never worn it.”

The feast of All Saints preserves the tradition of visiting loved ones in cemeteries; the cemeteries of all the localities are full these days. In Extremadura they are also dates to return to the town for those who live far away.

But why do we honor the deceased? Domingo Barbolla, sociologist and anthropologist from the University of Extremadura (UEx), gives some clues: “We are not even talking about the dead, but about the deceased.. The dead is a category that ends, but the deceased is a mental construction to understand that they are somewhere “.

“The 60,000 cultures that have existed throughout the planet – he continues -, in one way or another, have understood that death was not the end. Death has always been the great mystery of man and that mystery has been solved many forms. And the religions have taken it upon themselves to take a look beyond the space that is being exhausted. They are also the ones that rationally organize these ritualization processes. You may or may not be in the religious creed, and do the same in another way . But even from the side of secularism, there is no society that has contemplated total finiteness, not even from the most egregious atheism. There is no way to escape this mystery“.

He gives an example: “For those of us who have lacked a father or a mother when we were young, we always think that they are somewhere helping us. You can go to the cemetery, throw the ashes into the sea or plant a tree, but you need to do something because it is cultural genetics.“.

A fight against oblivion

From a philosophical point of view, Víctor Bermúdez, professor of this subject at the IES Santa Eulalia de Mérida, explains: “This ritual is the symbolic triumph in the face of oblivion, extinction and insignificance in which the passage of time puts us“.

Bermúdez continues: “Psychologically it is very hard and philosophically it is inexplicable that something that used to become nothing. That something disappears or ceases to exist is enormously inexplicable, it does not enter the human head. That is why religion is linked to death from the root , because it delves into the beyond. ”

It also speaks of a point of superstition, “that to be careful with the dead”, and the need to participate in the rite so as not to stay “outside the group.”

Visitors this week at the Cáceres cemetery. JOSÉ PEDRO JIMÉNEZ

Why is tradition less popular with young people? “They do not have such a clear consciousness of death. In addition, death is now spoken of in a much more banal way, surrounded by science; But what it implies, disappearing, is not publicly discussed“.

Thus, complying with tradition becomes a way of fighting against oblivion. For some the appointment is once a year, for others, like Trinidad Gómez, the visit is almost weekly. “I don’t know how to explain it, but it attracts me to come here. My daughter, for example, is not capable, “he explains. When these holidays are over, she will return to the cemetery again. And so on every 10 or 12 days.