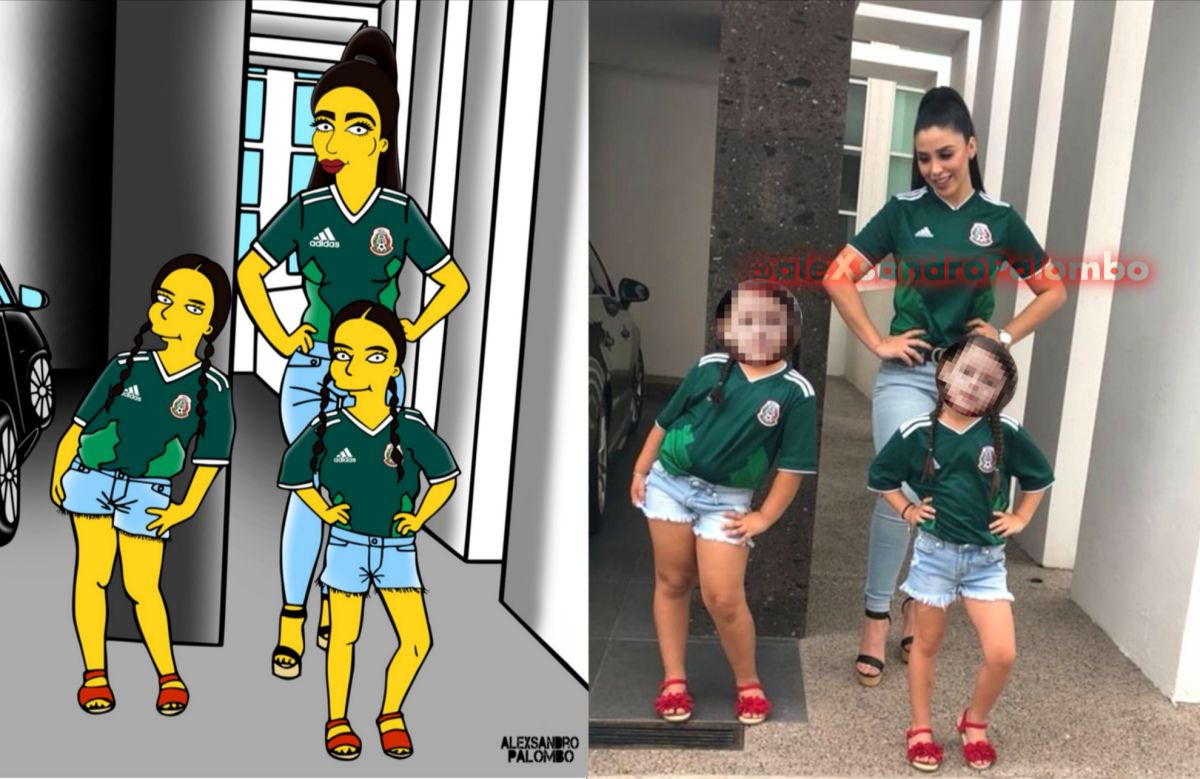 The Italian artist AleXsandro Palombo published a new series of photographs and illustrations of Emma Coronel whose image has become a constant in his style drawings The Simpson.

The wife of Joaquín “El Chapo” Guzmán Loera She has appeared in the midst of luxury and as one of the central figures in the trial against her husband in New York. It was in 2013 when Palombo joined the Sinaloa Cartel universe in his creative work.

“My art has always portrayed events and problems that affect our society”, Palombo explains to this newspaper. “Among the many figures that I have represented is also El Chapo; the first time I did it was in 2013. My work bears witness to the times in which we live ”.

The artist achieved greater international resonance with his exhibition “Break the silence” Against Domestic Violence, which he presented at the State University of New York (SUNY) and in a group show at the Museum of Civilization in Quebec, Canada.

That work began in 2014, when he used characters from Disney and The Simpsons to reflect the problem of domestic abuse. His work culminated in the integration of illustrations that showed world leaders, such as the former first lady, with severe blows. Michelle Obama and the former secretary of state, Hillary Clinton.

Palombo seeks with his series on Coronel to show women, more than the universe of the cartels, although she was born and grew up in it, but he defines her as a representation of “the marketing society”, as if she herself were a creation advertising.

“Emma Coronel is a woman who fully represents the society in which we live. I define it as the marketing and appearance society and Emma Coronel also has an influence on this “he explained. “My artistic work portrays the most intimate part that escapes the eyes of many people, to highlight a reality, very often, different from how it is told.”

The photographs that Palombo uses, however, most were revealed by the Coronel herself on her social networks, especially on Instagram, this newspaper found, although the artist insists that his artistic proposal focuses on her far from being “the wife of El Chapo ”.

“In my portraits I wanted to immortalize her essence as a woman and mother, and not as ‘El Chapo’s wife'”, he expressed. “I wanted to highlight the affection of a mother towards the family and her daughters, beyond the judicial case; the love and strength that only women have, this is an extremely pop value that must be revealed ”.

During her husband’s trial, Coronel acknowledged to this journalist that her greatest sadness was seeing her daughters’ names in court. What if, Emali Guadalupe and Maria Joaquina, 9 years old, they were present, even in body, when they accompanied their mother and greeted their father, in addition to their names appearing on some documents shown by federal prosecutors.

Palombo’s new series is titled “Family Portrait” and includes the comparison of the original photographs, with the pixelated faces of the girls, and the illustration style The Simpsons, where they are seen in a mechanical game, with Minnie Mouse ears. , wearing the official shirt of the Mexican soccer team; Coronel looks relaxed on an all-terrain motorcycle and there are a couple of images of her, one smiling and another taking a selfie looking well-groomed.

The images were released two days after Palombo released another series on the arrest of Coronel, which includes the “Chief Gorgori ” O “Wiggum ” (in English), and the Mexican president Andrés Manuel López Obrador “campaigning” to “save Emma.”

Although the president has not done something similar, he has been criticized for having greeted Guzmán Loera’s mother in public during a trip to Sinaloa, in addition to having released Ovidio Guzman, son of the drug lord locked up in the Supermax in Colorado.

Colonel is being held in Virginia and, according to her lawyers, seriously discusses the advisability of pleading guilty of the accusations of conspiracy for drug trafficking, especially since he seeks to get free as soon as possible to reunite with his daughters. Her case places her before the possibility of obtaining between 10 years in prison and life imprisonment.

Palombo describes himself as a contemporary pop artist and activist who creates “plays thoughtful and irreverent that focus on pop culture, society, diversity, ethics and human rights ”.

Other exhibits by the artist include “Marge Simpson by aleXsandro Palombo” at the Yves Saint Laurent Museum in Paris on the occasion of the exhibition “The Mondrian Revolution “ and the solo show “Life is not a fairy tale” at the Baltyk Skyscraper Gallery in Poznan, Poland.