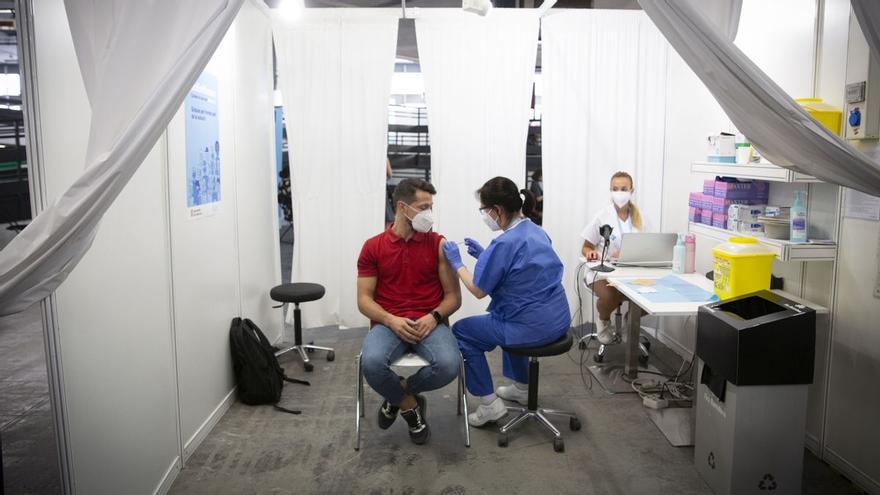 “With this variant we are more likely to miss group immunity, which is no drama and it does not change the fighting strategy. We must continue trying to vaccinate the largest number of people because, although we will not achieve global protection, it does allow us to make a functional control of the pandemic “, explains the epidemiologist and Head of Preventive Medicine at Hospital Clínic (Barcelona), Antoni Trilla. The message instilled is this: even when the maximum vaccination rates are reached, the restrictions, although some may be relaxed, will still be there.

The Rt of viruses

When a population reaches group immunity in a given disease, the reproduction index (the well-known Rt) is stable and maintained over time below 1, as explained by Trilla. That means that the disease stops spreading. And a vaccine is enough for this. “It happened with measles [mucho más contagioso que el coronavirus], for instance. Measles, a virus that has not changed for years and the vaccine protects you, from an early age, by 95%. Thus we manage to eliminate it and there are only small outbreaks in some places “, he says.

But the same does not happen with the coronavirus, a changing virus and before which vaccines, very effective in preventing serious illness and death, do not prevent infection, however. And there is another factor, in addition: “The population moves and Catalonia is not impervious to it. In addition, variants will appear that will be transmitted more and more easily and quickly,” adds this epidemiologist. That is why he insists on seeking the maximum number of immunized, because the vaccine does make it difficult for the virus to circulate, which will allow prevention measures to be withdrawn little by little. “Thus we will arrive, if a dangerous variant does not appear, to an endemic situation: the virus will live among us and infect some people from time to time, as happens with the flu.” Covid-19, he says, will cease to be “the disease” to be “just another disease.”

Catalonia has set itself the goal of putting two million vaccines this September and thus reaching 80% of Catalans immunized by the end of the month. Both in Catalonia and in all of Spain there are already 70% of people with the double pattern and, if the rhythm returns to what it was before the August break, it is foreseeable that in October are already vaccinated 90% of the Spanish.

According to the immunologist and CSIC researcher Matilde Cañelles, from the moment it has been shown that the vaccinated person can transmit the virus and that immunity decreases over time, “it is quite difficult to talk about what percentage of the population there is to have vaccinated to achieve group immunity “. “It is getting out of hand,” acknowledges Cañelles, who nevertheless does see “logical” for countries to set goals for themselves. “It was very logical to set the goal of having 70% of the population vaccinated in summer. In this regard, I am relatively optimistic: in this fifth wave, despite this variant, hospitalizations and deaths have fallen dramatically, the main objective to be achieved “, Cañelles account. That is why, like Trilla, it calls for continuing vaccinations. But not only that: “It is time to start giving a third dose to those over 65 because our seniors may be losing protection,” he claims.

This CSIC immunologist estimates that, in the coming months, Spain will keep the virus “controlled” thanks to the vaccine, although it will not disappear. He predicts that at least those over 65 will have to be vaccinated periodically. But he is optimistic and believes that “probably in the middle of next year” there will be no “waves” to begin to have “epidemic outbreaks”. “Unless a variant arises that invalidates immunity,” he clarifies. And, although you think this fall will be better than the last, it will not be as fast as you initially thought. “They said that with 70% vaccinated [objetivo alcanzado ya en España] the problem would be over, and no “.

The epidemiologist and member of the Spanish Society of Epidemiology (SEE) Joan Caylà points out that what is happening in countries such as Great Britain or Israel, which are experiencing high rates of infection again because they abruptly lifted restrictions, shows that having many people vaccinated does not guarantee transmission of the virus. “Thanks to vaccines, there have been no cases of measles for almost 10 years, only small outbreaks from an imported case. With covid-19, a behavior similar to that of measles can be expected. But there are years to go. A sixth wave is foreseeable, but less than the fifth. And little by little there will be epidemic outbreaks “, explains Caylà, who considers it a” priority “to have at least 90% of the population vaccinated.

For the researcher of the Group of Computational Biology and Complex Systems (Biocomsc) of the Polytechnic University of Catalonia (UPC) Daniel López-Codina, the concept of group immunity, however, “is still very valid” because it is an indicator of how the pandemic evolves. “As herd immunity increases, so too it decreases the velocity to which the pandemic is transmitted, therefore the strategy should be to increase herd immunity. If we get to very tall models, we can raise some measurements. But now it’s time, at least, to keep the measurements as now “, López-Codina thinks.

Although it is impossible to make predictions about the pandemic, one possible scenario is that covid-19, like the flu, becomes seasonal. But, for that, you have to keep vaccinating because, with very high immunization percentages, “Controlling the pandemic will be progressively easier”, López-Codina insists.

Give air to the sanitary system

This idea is reinforced by Ildefonso Hernández, spokesperson for the Spanish Society of Public Health (Sespas). “The perspective [de la pandemia] It has changed because, as we have increased knowledge, we have seen that the vaccine, although it has effects, does not prevent transmission. This means that the reproduction parameters of the virus do not go to zero, especially due to the delta variant “, explains Hernández.

According to him, “It is highly unlikely that we will soon achieve herd immunity” as originally thought. But, like his colleagues, he insists: “We must continue vaccinating.” “There is an undoubted objective that is still there: that the health services regain their capacities “, This epidemiologist stands out, who calls for strengthening the public health services in Spain, which have always been underfunded. It also warns that “most of humanity remains unvaccinated”, which further favors the transmission of the virus and increases the risk of new variants.