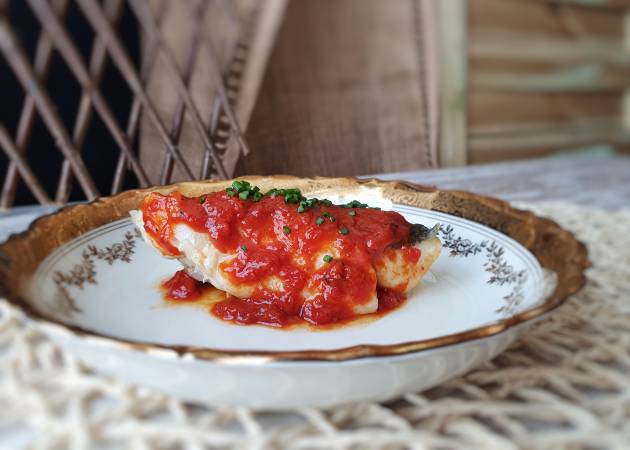 If something deserves to be taken out in procession in Spain during Holy Week, if something deserves a parade of homage, if any tradition brings together faith, suffering, epic, food, legend and transcendence, it is salted cod, the mummy par excellence, the dish of all Lent, the holy pot of the poor, the salt of the earth consecrating the sea. Forgive your people, cod, you who saved so many Easter from starvation, although today we have forgotten your immolation.

How many people desalinate cod at home? How many people know about the miracle of your resurrection? If we Spaniards, whoever we are, know a country, that is undoubtedly cod: “The great Basque preparations, pil-pil and Biscay, or Navarro-Rioja, such as ajoarriero, Mediterranean cod salads, Andalusian soldiers from Pavia, the Galician bacalao, or the Barcelonian bacalao en samfaina or la llauna demonstrate the enormous imagination that the Spanish have had in the treatment of this extraordinary salting “, applauds Néstor Luján in Like peeled pine nuts. We have spent centuries wondering what unites us as a people, when it turns out that it was hunger shared around a pot.

We Iberian humanoids had no choice but to imagine, forced by the pain of the gazuza and by the exhortations of the pulpit. Because every Friday of the year, all the holy days that fell during the week —with their respective eve-, all Pentecost, Assumption and Christmas, every Easter day except Sundays, and of course every All Saints day ; In other words, the entire damn calendar that the Church decided was to be blessed —with its corresponding prohibition of eating terrestrial animals— during that almanac that added 160 days of forced genuflection and consecrated hunger, millions of Spaniards skinny as one raspa, poor without solemnity, obedient and pious, but savvy like tents, they parked the hoe and shared jerky of revived cod like blessed hosts, like a pilgrim miracle, like an amphibious body of Christ.

“My attempt being to instruct you in all things that serve human maintenance, it seemed to me to begin in Abadejo, although you notice at the beginning of little substance”, said in 1745 the friar Juan Altamiras in New Art of Spanish Cuisine, the first canonical cookbook of this country, published with the ultimate goal of decently feeding the wretched. The cod or haddock or trout or curadillo, according to the four terms that Cervantes uses in El Quijote, or the bacallà, capellà, bacalau, bakallao or badexo, has been our best prayer.

Because we are talking about a prodigy: an animal that are two different animals, depending on whether it is fresh or salted. A raw white fish, with less than 2% fat, which when embalmed turns into blue, by concentrating its substance. A marine critter, up to one meter long, perfect for transporting and storing, revived by water or milk in a good quality protein and health concentrate. And a legendary fishing, which kept the huge codfish in frozen waters for semesters, with their crews crowded together like the cargo they caught and salted.

The history of cod is the history of Spain; also that of Europe and almost that of the world, thanks to a guy named Thorvald Asvaldsson, who by some mistake was not Spanish, but Norwegian. Thorvald was a Viking warlord, a horned legionnaire, father of Greenland colonizer Erik Thorvaldsson (or Erik the Red), and grandfather of Leif Erikson, the first navigator to touch America. A restless family that was bored at home. In the 10th century, the grandfather Thorvald and his son Erik were exiled to Iceland for murder and, in order not to be transmuted into stalagmites, they devised a system of conservation of the fish that swarmed under those solidified waters.

They cured cod in the air until it lost four-fifths of its weight, until it turned into wood and lasted an eternal winter. Then, they split it with an ax, put it in their mouths and spent hours sucking on it, wearing their teeth more than their teeth, leaving their tongues like relics of Saint Teresa. Behind this legend of Viking survival there is, however, a scientific finding: remains of cured cod have been found dating from the year 800 to 1066, proving that the Nordic peoples traded a thousand years ago with a product that their furious ships later expanded downward.

This was the case until the discoverers were discovered, that is, until the Genoese Giovanni Caboto arrived on the Island of Newfoundland in 1497 and found that those Atlantic coasts, off which the Titanic would sink, were crowded with fertile banks. The influx of cod led to an epic fishing that transformed the fleets of half the world. In our peninsula, those of Portugal, Euskadi and Galicia, which were left next to the Arctic for generations of arms. Some huge boats transported hundreds of men to that overseas, where they spent six months fishing in boats called doris, fishing by hand, with hook, cold.

Every sailor drew “Between 25 and 200 cod a day, although there were cases of up to 400 copies a day”. Provided, of course, that they did not drown or disappear into the mists: back on the ship, the sailors formed an assembly line; headless, gutted, deboned, washed and stored in the cellars between salt. The night huddled the crew in the little space that was left, like human loins equally embalmed. Some did not wash in half a year, for fear of freezing.

Few foods have meant so much suffering, few have relieved so many hosts that could not access fresh fish, as Julio Camba sarcastically recalls in Lucullus’s house, where he laughs at our misery for not crying: “Throughout the interior of Castile, fish is called fresh, but not fresh fish, but rotten fish. Who knows the fresh fish in towns that are 500 or 600 kilometers from the coast. All sea fishing arrives in these places in such a state of putrefaction that the most delicate Chinese gourmet would have no qualms about it, and it is precisely in this putrefaction that its freshness is recognized. The cod, in fact, or the mojama do not spoil, and hence the rotten fish is called fresh to distinguish it from cured fish ”. We exchanged words to fool the stomach.

Fishing in doris evolved to the drag in pairs, and consumption became general, driven by the invention of the aforementioned Lent, with which, by the way, the Catholic Church made the Lutheran Norway rich, converted thanks to the enemy catechism into the main exporter of fish salted fish. The Spanish Government, as always slow, found in 1824 that religion was damaging the treasury and, to stop it, approved the State Monopoly of Cod, limiting the Nordic use and inciting the local bourgeoisie to do business. It was then that another legend arose, that of Don José María Gurtubay, a Basque who at the end of 1835 ordered “100 or 120 bacaladas” from his suppliers, to sell them, but who, due to an error in reading his handwritten note, received 1.000.120 copies; that is, a million fish, like those faithful to Jesus Christ. Don José María made an ecce homo face.

But lo and behold, fortune saved him from the breach when General Zumalacárregi besieged Bilbao and the entire city had to feed on his fish, turning him into a millionaire: war, that great business. Because cod, in addition to feeding, you may not see: if Auguste Escoffier calculates in My kitchen that one kilo would satisfy “six or seven people”, that same kilo fed hundreds of beggars in our nineteenth-century Spain. gachas and toothless. To get to know each other, you don’t need Twitter, you just have to go back to Baroja and Galdós, as it was enough to fill the pot with legumes, potatoes, winter vegetables or any cheap ingredient that is soaked well with the strong flavor of a small jerky so that the miracle of multiplying saucepans.

This is how our cookbook was born, which is actually a rosary. The absolutely harvested cod fed Spanish armies, also literally, as it was used during many war campaigns as the best supply. When Azaña and Negrín reviewed the troops of the Second Republic, they were alarmed by the low height and scrawny weight of the soldiers. “Centuries of poor nutrition”they concluded. The solution? That the barracks began to serve cod left and right.

It is therefore understood that cod has a collection of unparalleled dishes, many of which we are forgetting due to the laziness of dipping a loin or some crumbs in water, laziness that distances us from the tradition that we later praise with our arms in high, with the horns unhinged, with the bar roars, with the indignant tweets and with the flagging spirits. Amid so much shouting and so much intolerance, we forget our past, we forget that cooking cod is amazing: vigil stew, Valencian esgarraet, fritters or the humble potatoes with cod.

There is a world beyond the cocochas, as there is another flavor other than the frozen “point of salt”. And there is a time when cod becomes a calendar: this Holy Week in which we take dolls to pass through the streets, mojamas de santos, stiff virgins and Nazarenes of frozen suffering. When what we should parade, in homage to our history, are cod; the most merciful of all our incorrupt saints.