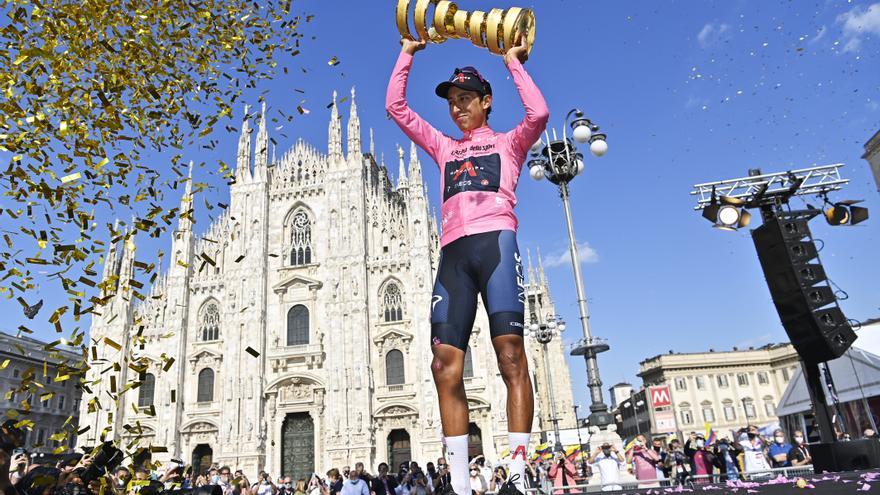 Egan Bernal (Zipaquirá, 24 years old) cleared up doubts by illuminating Milan, the city of fashion, with the light of the pink jersey of the Giro d’Italia, thus resuming the path of success that was interrupted by an injury after winning the Tour de Francia 2019.

That historical event opened the record of the ‘grande boucle’ to Colombia thanks to the ‘Nobel of cycling’, But a back injury eliminated him from the 2020 Tour, entering a path of doubts that he has managed to travel by signing his second major in the 2021 Giro. The Colombian idol now only needs to complete the trilogy the red jersey of the Vuelta.

Bernal was born on January 13, the same day as the ‘Pirate’ Marco Pantan. Unforgettable day, especially for Flor, her mother. The mother went into labor, assistance was urgent, but a day of labor strike eliminated the option of finding an ambulance to go to the Bogotá hospital. They had to go by taxi, and spend 2 hours in 40 kilometers. A premature champion was born.

Egan, a winner before he was born

The family doctor, José Bulla, fond of mythology, predicted the future of Flor’s son when he was still in his mother’s womb. “He will do something great in life, and he must be called Egan,” which is ancient Greek for “achiever.”

Bulla was absolutely right. Bernal became a national hero that 2019 of glory. The “Chinese” broke the molds of cycling by putting his country’s anthem on the top of the podium in Paris, the same day that the Eiffel Tower was dressed in the colors of its flag. Two years later, the Milan fashion show was pink in honor of the Ineos leader.

At the age of 8, the boy who was rolling on the trails of the Parque de la Sal de Zipaquirá, signed up for a race with the borrowed case and achieved his first victory with the wide wheels of the BTT. The award launched him into the sky: a full uniform and a scholarship to a sports club.

A reason for satisfaction for his father Germán, security guard of the Salt Cathedral of Zipaquirá, a World Heritage Site, a modest cycling fan who went out riding with little Egan. The genius project was already underway.

Bernal went on the mountain bike at the hands of Pablo Mazuera, a sound engineer fond of mountain biking who immediately contacted the technician Sergio Avellaneda, who summoned Egan for the Colombian team of the 2014 World Cup in Norway. He was a youth silver medal and the following year a bronze.

The definitive leap to the road came in Italy, where he was watching a test of Team Colombia. They introduced him to Gianni Savio, the manager of Androni, a connoisseur of Colombian cycling.

There was suspicion, but on December 20, 2015 he was offered to participate and the possibility of demonstrating his conditions in the Giro delle Fiandre, a prestigious test for youth. Bernal accepted the challenge, won with an exhibition and was signed by Androni at the age of 18 and for 4 seasons,

In 2016 he began the facet of “rutero” of Bernal, considered a gifted. The studios dilemma was important at the time. He studied high school in Zipaquirá, near the institute that hosted the Gabriel García Márquez Nobel Prize in literature.

Bernal finished his studies and he enrolled in the career of Social Communication at the University of La Sabana, but he missed the semester due to continuous absences. He got good grades, but he was late to class and he was not treated differently for being an athlete. The professional path was to be cycling.

Of the sky to the sky

Apart from the books, in 2016 he was the best young man in the Semana Coppi and Bartali, and later in the Giro del Trentino, a test that Mikel Landa won. The first victory in a general was signed in the Tour de Bihor.

Under full sail, Bernal scored the Tour del Porvenir in 2017, with 2 stage wins, and six titles for best youngster in various events. That speaker aroused the interest of the World Tour teams. A genius was on the loose.

Expectations were met. Sky tied him up when he still had a 2-year contract with Androni, and the British line-up, full of stars, such as Chris Froome, Geraint Thomas is already enlisting him to debut in the 2018 Tour de France. A year of triumphs, winning the Tour of California, Colombia Oro y Paz and the national time trial title.

“He will be the replacement for Chris Froome in a few years,” said Darío Cioni, Sky director. In that Tour del debut Bernal it was key to Thomas’ victory and Froome’s third place finish. He qualified fifteenth and in the mountains he proved to be stronger even than the leaders of his team.

“A Federer who needs his Nadal”

“Like all geniuses he has achieved it before the others. He is a Federer who needs his Nadal to create the rivalry that will mark an era.” It is a phrase of Christian Prudhomme, director of the Tour after the triumph of Bernal in 2019.

That triumph, which came after winning Paris Nice and Tour of Switzerland, surprised the cycling world, least of all the doctor who knew him before he was born. “Egan’s victory is the triumph of honesty, integrity and loyalty”, as reflected by the French journalist Guy Roger in his book “Bernal and the sons of the mountain range”.

Bernal could not measure his Nadal in 2019. A back injury derived from a scoliosis suffered by the Zipaquireño withdrew him from the 2020 Tour. That year came the figure of another genius called to mark that duel with the Colombian, the Slovenian Tadej Pogacar, 21-year-old Tour champion.

Pain in his back slowed Bernal’s thrown trajectory. In 2020 he could only win the Occitania Route. Then came the temporary retirement, medical examinations, rehabilitation and the work of his coach, the Spanish Xabier Artetxe.

The doubts reached Turin on May 8, the day the Giro was launched. Would Bernal return to his level? Affirmative answer. Without sweeping, but with superiority before all and a lot of intelligence he won his second great, the fifth for a Colombian.

The Andean mountain range feels happy. The heritage of its great cyclists lives on. Efraín “Zipa” Forero, Martín “Cochise” Rodríguez, Sponsorship Jiménez, Fabio Parra, Lucho Herrera and Nairo Quintana are some of the names that have in some way marked Bernal’s path.

In difficult social moments for Colombia, Bernal sends a smile to his compatriots and brings more light to that glorious past with the fifth great national title in the majors, the second in the Giro, 7 years after the one achieved by Quintana. With the yellow of Paris and the pink of Milan, remains the title of the Tour. The 2021 edition of the Spanish round awaits you delighted. In Cibeles a red jersey can be illuminated on their backs. Cycling has a stellar duel. Bernal and Pogacar.