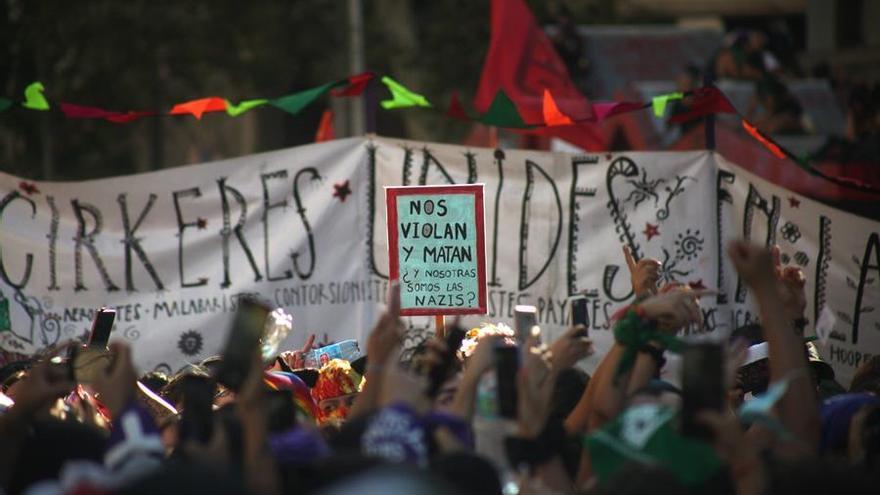 At International Women’s Day, in Latin America The pandemic was not an impediment for many women to raise their voices from their homes, in virtual events or from the same street in the “fight” against violence, equality and the right to abortion, with great absences such as Brazil and Peru due to the health crisis.

America already registers 51.6 million infections by covid-19, of which 22.1 million are in Latin America, and despite the restrictions to avoid new infections, the women decided to go out and call on the governments in the face of the other pandemic : sexist violence. This situation worries in the United States, where domestic violence increased 8.1% since mid-March 2020 following confinement orders, according to a report released by the National Commission of covid-19 and Criminal Justice (CCJ). In that country, the statue of the “Fearless Girl”, installed in front of Wall Street, appeared on Monday surrounded by large pieces of glass to commemorate International Women’s Day, which symbolize all the “glass ceilings” that it is breaking. the female gender in the corporate sector.

In Mexico, Argentina, Chile or Colombia, women raised the defense and protection of their rights, as well as made visible the role they can play in times of post-pandemic, as the United Nations defended this Monday by ensuring that they should be at the center of the recovery for the world to finally move towards gender equality.

A brake on sexist violence

Governments like Argentina took a step to create a State policy in a country moved by the number of femicides that are registered daily. The president, Alberto Fernández, signed this Monday together with all the provincial governors of the country a “Federal Agreement for a United Argentina against gender violence”, so that “there are no more Úrsulas, so that there are no more Micaelas,” in reference two emblematic cases of femicides in the country.

After achieving the decriminalization of abortion in December, the Argentine women focused the marches this Monday on equality and the eradication of violence and the effect that the pandemic has had on women, due to the domestic tasks that have fallen on them and on many occasions with minors in charge who did not go to school.

In this current, Bolivia also committed to improving working conditions and “protect” women so that there is “not one more dead.” The groups of women and representatives of mining, workers and indigenous people gathered in an auditorium of the Casa Grande del Pueblo (seat of Government) waving white flags that said 8-M and with posters that read “30 years in prison for femicides “and” we want justice. ” According to the map of the Latin American Network against Gender Violence, in the region some 2,330 feminicides are registered in a preliminary way in 2020 and 110 so far this year, amid the historical under-registration of this scourge.

The disdain of López Obrador

Mexico is one of the countries that has starred in one of the most symbolic and significant marches with lights and shadows. Thousands of women, including artists, activists and communicators, sent a letter to President Andrés Manuel López Obrador to demand concrete actions against the protests on this day. In the letter, signed among others by singer Julieta Venegas and Oscar-nominated actress Marina de Tavira, the women used the hashtag #UnaSolaVoz to criticize that the leftist leader has scorned the feminist movement and questioned his lack of commitment to rights sexual and reproductive factors of women. In addition, the controversy broke out after the candidate for governor of the state of Guerrero (southern Mexico) Félix Salgado Macedonio, accused of rape and abuse, celebrated Women’s Day on social media and praised his struggle in a message posted on Twitter.

Thousands of women gathered around the emblematic Monument to the Revolution, which suffered some damage, after breaking the fence, in an act celebrated as a symbolic moment by the protesters, while other protesters demolished part of the metal wall that the Government erected around of the National Palace, residence of the president.

Mexico City Police they attacked and detained four photo reporters, one of them from the EFE Agency, who were covering a demonstration in the capital’s subway when they were following a march of women who painted the suburban facilities.

Recognition of the female scientist

The Colombians also celebrated the 8M with different marches in which women with purple and green scarves gathered in favor of the legalization of abortion, in the center of Bogotá, in addition to developing concerts, a vigil for the victims of gender and workshops aimed at mothers, girls and adolescents.

In the middle of the event, in a country that already registers 2.27 million cases of covid and 60,503 deaths, Diana Trujillo, NASA flight chief, received special recognition from the jury of the Cafam Prize for Women for her contribution to the historic landing of the robotic Perseverance rover on Mars and its contributions to aerospace engineering.

With the landing of the “rover” on the red planet on February 18, the Colombian woman successfully fulfilled two aspirations: participate in the historic mission to discover if there is life beyond Earth and carry out for the first time in Spanish the exploits of NASA live.

“Today is our day”

In many of the marches that took place today, the groups asked that men not attend these events, and in unison “today is our day” several Chilean women rebuked a group of men who sabotaged the celebration that took place in the center of Santiago in Plaza Italia, the epicenter of protests in Chile, when they tried to tear down a statue.

The Chilean police dispersed the massive march that was being held in the capital with tear gas and trucks launched into the capital, in which thousands of women and adolescents participated in a festive and family atmosphere.

Also, the Movement for Homosexual Integration and Liberation (Movilh) reported that since 2002 and to date a total of 1,632 lesbian, bisexual and trans women have reported abuses based on their sexual orientation or gender identity.

Amazonian indigenous women echoed their situation in Ecuador, where they demanded respect for their territories and rejected the exploitation of subsoil resources, as “defenders” who consider themselves “of life” and the environment. “We are not here today to celebrate or to celebrate with joy because our sisters are still being dispossessed of their territories, our girls and boys are being left without homes” due to extractivism, said Lineth Calapucha, vice president of the Quichua nationality of Pastaza.

At the same time in Mexico, indigenous women marched in the Highlands of Chiapas, mountains in the southeast of the country, to claim their role by asking for their individual rights, the optimization of basic services in their communes, such as education and health services. health, and demilitarization, which they consider a great debt of the State.

Central America and the “clandestine” march

In Nicaragua, dozens of young people carried out a “clandestine” march, and dressed in purple scarves, black crosses, and masks against covid-19, they protested inside the Central American University (UCA), to avoid being captured by the National Police, who prohibits demonstrations outside the ruling party Sandinista National Liberation Front (FSLN).

In Honduras, the pandemic has generated more unemployment among women than men, together with other violations of their rights, which has caused many to have swelled the ranks of migrants who have left in the last caravans to the United States, even carrying her children in her arms, said the coordinator of the Program for Strengthening Women’s Right to Decide, Regina Fonseca.

Panama took a step this Monday with the sanction by President Laurentino Cortizo of a law that punishes political violence and all kinds of harassment against women for gender reasons, within the framework of the celebration of International Women’s Day.

At the same time, feminist groups presented a popular initiative that aims to bring to the Costa Rican Congress a bill on legal, safe and free abortion, for which they will need the signing of 5% of the electoral roll.