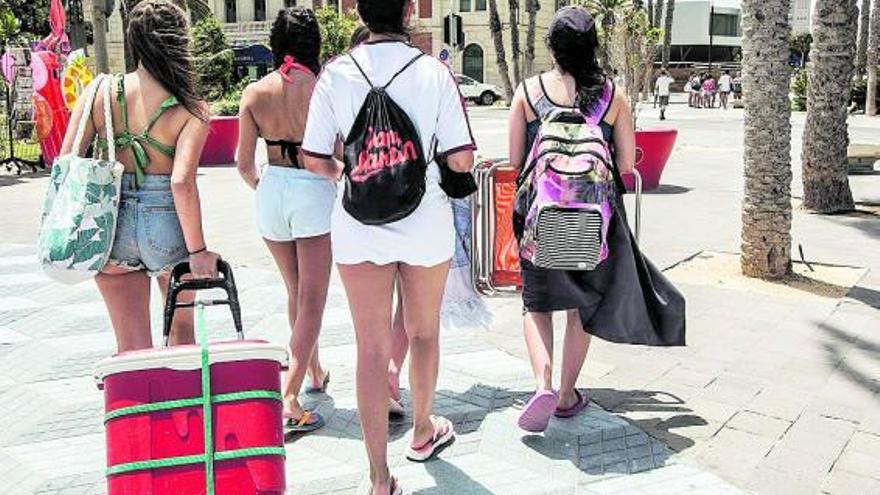 Most of those consulted are aware of the risk of getting infected in their leisure practices. Although they agree that it is not justified to go out without complying with the measures since they affirm that they usually wear the mask and move with their groups of friends, they recognize that after two drinks “Responsibility goes through the pores”, points out Manuel Bernabeu, 21 years old, who has ruled out going to nightclubs, pubs and chestnut trees due to the risk of being infected and of being able to transmit it to parents or grandparents, with whom he spends more time during the summer. This young man understands his peers because «going through the summer and Christmas of 2019, with a brutal rhythm of leaving and returning home at 8 in the morning, the current null situation has been a shock, and great, for the young people. That does not justify the bottles without safety distance in the streets and that is why we are accused of the fifth wave, an erroneous generalization because not all of us fit into the same bag. This reductionism is negative for our age range.

A message similar to that of David, Victor, Raquel and Claudia, 17 years old, who agree that “in all age groups there is someone who messes it up,” says the first. However, he adds that “seeing everything full and that there are bottles is an unconsciousness.” They acknowledge having seen concentrations from which they claim to flee, leaving with a mask and always the same circle of friends. Claudia points out that he does not leave because of his 91-year-old grandmother, “it makes me very angry to see people without taking any action”. Seven friends from Albacete, aged 16 and 17, say that they protect themselves but that, after the course, summer arrives “and you want to go out, it is logical.”

In general, young people have a low perception that they can suffer a serious covid if they are infected and that alert has dropped since most of their relatives are vaccinated. “Many young people see no danger in being infected, they see it as a week of quarantine, without realizing that the situation can be very complicated,” says Paula Terrazas. Pedro Sáez, 22, blamesl wear and tear from enduring so many months that the guard has been lowered, after a few more lax measures that have returned to the orcio «with everything to burst and the people most stuck». “In the end you don’t care, and you explode because you don’t see the contagion so close,” he says. However, “you do not want to hit your friends”, hence they are more reluctant to meet with “colleagues” than to mix in an environment with other people. This is behind the fact that more and more people are opting for antigen tests in private clinics. The young man believes that, despite the closure of leisure, parties will be held in the houses: “without a curfew it will continue to happen.”

Young people from Alicante or on vacation in the city admit to having witnessed massive gatherings of young people without masks in places and on the street. In general, they note that police pressure has dropped and they miss alternative leisure proposals. Those who usually comply, opting for the terraces or outdoor spaces, confess that they met en masse in places to watch the National Team matches. They also wonder where the difference is, when it comes to the risk of contagion, between having a snack without masks in the institute in a group and being in a disco with friends and without dancing.

Nerea López, 21 years old, He went with his friends to the Golf area a couple of weeks ago, “We went into a pub and the situation was insane, people very close, without a mask, horrible, as if the covid did not exist. When you see that you don’t feel like going out. It was petado and from there people with covid insurance come out ». The last party, he remembers, in which he was able to socialize was at the University, 2 years ago. “Now that cannot be done, although there are people who do it. I am cautious and I try to do things well ”, which is why she limits her social life to her partner and lifelong friends, says the young woman, who believes that this is not the time for macro-bottles like the one in Mallorca. “This kind of thing also happens in Alicante”, warn several of them.

Four friends from Alicante and Murcia, also minors, who claim to comply with all the measures. | PILAR CORTÉS