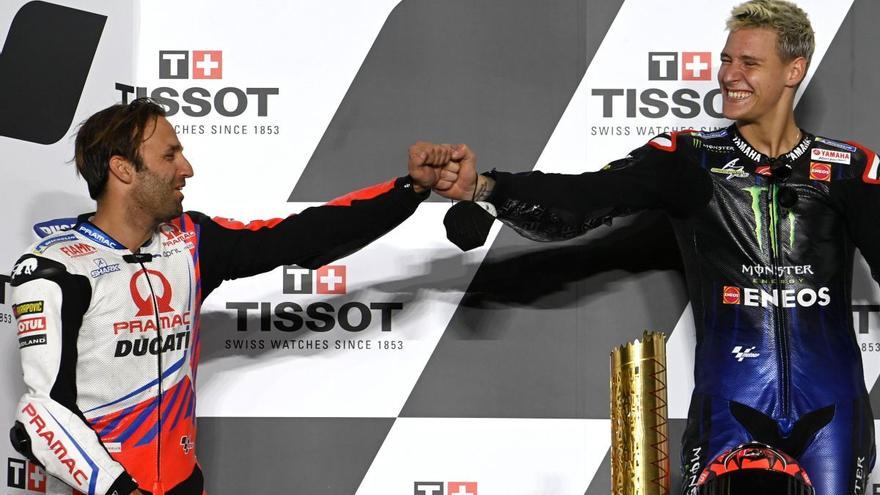 The french Johann Zarco (Ducati Desmosedici GP21) and Fabio Quartararo (Yamaha YZR M 1) they did the full at the end of the first training day of the MotoGP French Grand Prix that this weekend is held at the Le Mans circuit, without public attendance due to the worsening of the pandemic situation in France.

Zarco set a best time on his penultimate lap of 1: 31.747, just 95 thousandths faster than his compatriot Fabio Quartararo, who had been the fastest almost during the entire second round.

As it happened in Moto3, at the first change all the MotoGP riders “threw to the trash” the records of the first free round, being able to roll with the asphalt completely sex at the beginning of the second session, in which the first to set the reference, how could it be otherwise, was the Frenchman Fabio Quartararo (Yamaha YZR M 1).

Quartararo rolled in 1: 33.025, almost five tenths of a second ahead of Spaniard Alex Rins (Suzuki GSRX RR), 1: 33.478, and more than a second compared to Maverick Viñales (Yamaha YZR M 1), who on his next lap, the fourth, was already nine thousandths behind the Suzuki rider.

But it did not take long for Fabio Quartararo to lower his record again, who on the fourth lap stopped the clock at 1: 32.689, again chased by Alex Rins and Maverick Viñales, as another Spaniard, Aleix Espargaró (Aprilia RS-GP), he would crash on the fifth lap at turn three and had to return to his workshop on the service road in search of his second bike.

And it was not the last fall of the oldest of the Espargaró brothers, who next week will have to operate on his problems with the “compartment syndrome” in his right arm, because just a few minutes later and at the same point, turn three, he was going to the floor again to his despair, although this time he was able to return to his workshop on his Aprilia.

Quartararo lowered his personal best once again by shooting 1: 32.120, which gave him an advantage of almost six tenths of a second over his immediate pursuer, the Japanese Takaaki Nakagami (Honda RC 213 V), ahead of Alex Rins, Pecco Bagnaia, Maverick Viñales, Joan Mir, Johann Zarco and the Spanish Pol Espargaró and Marc Márquez, from the repsol Honda team, and Alex Márquez (Honda RC 213 V).

Márquez was another of the involuntary protagonists of the session, although in his case he did not fall because he went straight at turn eight and practically then returned to his workshop to check the condition of his motorcycle.

Another one who tested the hardness of the asphalt was the great local favorite, Fabio Quartararo, who fell at turn three, like almost everyone – Alex Rins also suffered a mishap at that point shortly after – and could not start the motorcycle again to return to his workshop and repair the damage, although his first position did not seem like danger, while he had to go back down the service road to get on his second motorcycle.

Another of those who crashed in those moments was the Australian Jack Miller (Ducati Desmosedici GP21), in his case at turn seven, although he was able to recover the motorcycle, start it and return to his workshop, although at that time he was thirteenth and was out of the second direct classification.

Viñales managed to win the position to Nakagami to place second but more than four tenths of a second behind Quartararo’s record, who remained solid in the first position until the lowering of the checkered flag, despite seeing how some of his fastest laps were canceled by Race Direction when they exceeded the limits of the circuit.

Quartararo improved his personal best to roll in 1: 31.842 almost in the same lap in which the world champion Joan Mir (Suzuki GSX RR) also went through the floor, although in turn eight, and his compatriot Johann Zarco (Ducati Desmosedici GP21) was second, but still with a fast lap ahead in which he clambered into first place by running at 1: 31.747.